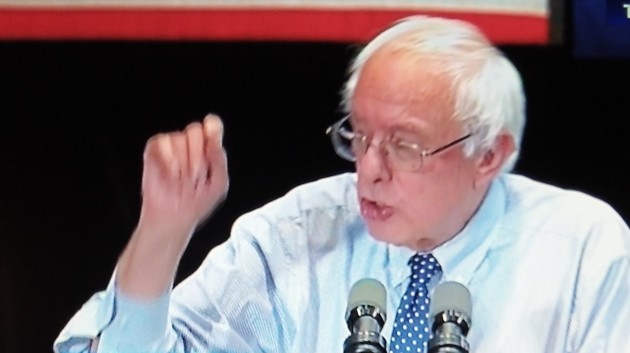 Sen. Bernie Sanders of Vermont as he appeared on C-SPAN last Friday.

How is it possible to kind of like a presidential candidate whose ideas would not work except to lead to ever more government control of everyone’s life? I don’t know, but I couldn’t help nodding now and then when I was flipping channels the other night and ended up with C-SPAN and Bernie Sanders at a campaign rally in South Carolina.

At that rally, Sanders, in shirt sleeves, worked up a sweat as he thundered against the super rich and called for all kinds of programs to benefit the average citizen, including universal health care for everyone under a goverment-run single-payer system, free college for everyone who wants to go, higher wages for working people, and expanded Social Security for people who left the work force behind.

It all sounds delightful — if it could work — and it’s true that our-technology driven economy favors the few and leaves the masses behind. But it also sounds like what landed Greece in the shape it’s in.

Sanders would tax the hell out of the rich to pay for all the free stuff he wants the government to provide. Somehow I doubt there are enough of those people, and that they would stick around to be hosed if Sanders got his wish.

So no, he’s not the guy I would vote for. But among all the candidates, he comes across as a genuine character, not a bombastic phony like Trump or the calculated creation of political consultants and pollsters like some of the others in the running on either side.

Sanders says what he believes, and believes what he says, and it’s been consistent since he was a young man, always on the liberal side or on the left. Consistency is a good thing, far better than being shifty, even if a man is consistently wrong.

There’s also this: Sanders will be 74 on Sept. 8. It takes a lot of commitment to a cause for a guy that age to subject himself to the punishment of a national campaign, such as making speeches in August in South Carolina, where the room was so hot that his shirt was sticking to his chest. (hh)


6 responses to “Listening to Bernie Sanders”