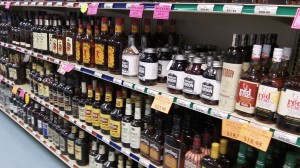 At the downtown Albany liquor store.

Before anybody tries to change the way Oregon sells and buys hard liquor, he’ll have to persuade people that there’s something wrong with the system we have had since the 1930s. It’s old-fashioned, but so what? What’s wrong with it?

Since the end of Prohibition the state has had a monopoly on buying, warehousing and distributing distilled spirits, and to sell them through licensed liquor agents under strict rules about what they can and cannot do. Presumably the idea is to keep a lid on drinking.

Some agents have chafed under the rules as too meddlesome and restrictive, and lately the Northwest Grocers Association has pushed for getting the state out of the liquor business altogether. They may try an initiative in 2014.

One big argument against change: On July 30 the Oregon Liquor Control Commission reported record liquor sales, up 12 percent, for the two-year budget period that ended in June. During the same period the OLCC transferred $119 million in liquor profits to cities, $35 million to counties and nearly $226 million to the state general fund. It’s hard to see that as a problem that needs fixing.

The grocers say buying liquor now is inconvenient. So what? Liquor stores are friendly places, not usually crowded, with a huge selection. Making a stop there on the way home is no big deal. And it can hardly be in the public interest to make buying liquor so convenient that more people consume a lot more booze. (hh)

From  Greg Storms:  I have to agree.  I have lived in a lot of different places outside Oregon — all the way from places with 24-hour drive-up liquor stores to places that are totally dry.  I think Oregon has struck a fine balance.  If it’s not broke, don’t fix it!