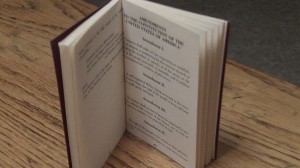 Will the constitution protect law-abiding citizens? Sheriff Mueller says he’ll try to make sure it does.

(With several comments at the end)

Linn County Sheriff Tim Mueller made a splash in the news Tuesday by publicizing a letter to Vice President Biden pledging to defend the constitutional rights of citizens against questionable federal gun controls. The sheriff’s heart is in the right place.

Politicians, the sheriff wrote, “are attempting to exploit the deaths of innocent victims by advocating for laws that would prevent honest, law-abiding Americans from possessing certain firearms and ammunition magazines. We are Americans. We must not allow, nor shall we tolerate, the actions of criminals, no matter how heinous the crimes, to prompt politicians to enact laws that will infringe upon the liberties of responsible citizens who have broken no laws.” The sheriff put that exactly right.

According to a law just passed in New York state, citizens there are supposed to register with the police if they own certain rifles. If they fail, they can be charged with the crime. Talk about the state making criminals of people who have done nothing wrong.

In Oregon, Sen. Ginny Burdick, a Portland Democrat, has introduced a bill that would make criminals of people who sell magazines that can hold more than 10 rounds of ammunition. The punishment could be a year in jail and a fine of $6,250. Most of the semi-automatic pistols found in Oregon households are built to hold the magazines defined in the bill. So once their magazines wear out — maybe from frequent use in matches like the one last year to raise money for the ABC House in Albany — those guns would become useless except maybe as clubs with which to hit an intruder over the head.

That kind of restriction has nothing to do with criminals. It’s a restriction on honest people, and it’s the kind of law Sheriff Mueller says he will try to resist. But before it comes to that, such laws must not pass. (hh)

From Edgar Hahn Jr.: Assault rifle magazines do not wear out; especially, for the average gun person.  If properly maintained.  Oiled.  Kept in a gun safe.  They will last a lifetime.  Any trained, responsible gun owner will tell you that fact.

From Ray Kopczynski: I don’t recall reading that Linn Co. seceded from the state or country.  I also haven’t read where Tim has a doctorate and experience in interpreting constitutional law.  Tim has an absolute right to state his opinion.  However, while in uniform I don’t believe he has the right to dictate that he will intentionally break a/any law – regardless of his feelings about it.  While he wears the uniform, it is not *his* call to determine which laws he will or will not uphold.  Outside of the uniform – that is his prerogative.  There are multitudes of ways to change law.  To simply abrogate the responsibility of upholding a law is not one of them in my opinion.  And for him to categorically state that will be the policy over all of his subordinates also scares me…  Who set him up as judge & jury?  He mentioned a 1997 Supreme Court case – which I have not seen nor read.  Presuming the DH article this morning is accurate, it implies that he can arbitrarily and capriciously decide which federal laws he will uphold — and then dictate his requirements of same to the other folks on his staff.  Those folks aren’t able to make a conscious decision as to which laws they wish to uphold? I do suppose it is within is purview to indicate that said law[s] will be a *very low* priority under his watch… But – I don’t believe he is correct in stating it – the way he has done.
From  Hazel: My opinion is that Ray is a stuffed shirt and budding politician!
From Ray Kopczynski: If she only knew how stuffed my shirt is – and that I already am a politician by appointment.  Apparently she doesn’t.
From Warren Beeson: Some say the sheriff can’t choose which laws to follow and which to violate.  I say that if there are two laws that contradict each other the sheriff is compelled to do so.  In this case, Obama’s actions clearly contradict the Constitution, which is the very basis for all our laws and the foundation on which they are built.  Thus the sheriff is forced to make such a choice between the two.  Does he ignore the Constitution and follow the dictates of a politician, or does he follow the Constitution and ignore the law?  Clearly he should follow the Constitution as it is the basis for all our laws and any law that contradicts its basic precepts is not legal.  The rights of citizens do not come from the government.  They are, as Jefferson said, inherent and unalienable.  Obama or any politician cannot overrule them and has no authority to do so.  Sherrif Mueller is not only correct in his opinion, he is to be lauded for his patriotism and courage in defending our basic rights.
From Ernest Murphy: The good Sheriff Tim Mueller  said any law that offends the constitutional rights of the citizens of Linn County shall not be enforced. That is a period not a question mark. Regardless what people think he can or can’t do. Tim Mueller swore to support the Constitution of the United States. Federal regulations or executive orders will hold no water if they offend the Constitution in Linn County. I will rest easier knowing the highest elected law enforcement officer in our county means business regarding our rights.
Posted in: Uncategorized