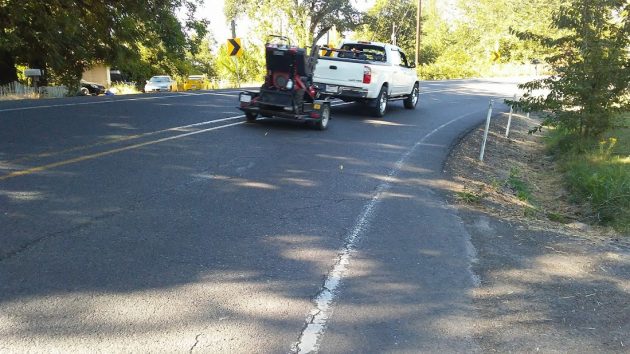 This sharp turn on Riverside is a little more than a mile west of Oakville Road.

Linn County’s plan to widen Riverside Drive — a long-awaited safety improvement for drivers and bike commuters — is about to take off.

There are more crashes on Riverside than on any other Linn County road, says Chuck Knoll, the county engineer in the Road Department. Safety improvements have been contemplated since the 1990s.

Now, after a lengthy period of planning, acquiring strips of property, and getting state and federal permits for items such as wetlands and archaeological resources, the county is ready to call for bids next Friday on Phase I of the project to widen and repave Riverside from Oakville Road, just outside the Albany city limits, to Meadow Road, about 2.4 miles way.

Then, the county expects to open bids toward the end of August and hopes construction can start by mid-September.

The road will be widened to at least 32 feet across. With two 12-foot travel lanes, that leaves a minimum 4-foot shoulder on both sides. Four feet may not sound like much, but it will be twice, and in some places more than twice, the space available to bicyclists now.

This will be helpful to bike riders using Riverside and the separate path alongside Highway 34 to travel between Albany and Corvallis. While wider paved shoulders won’t protect cyclists from the possibility of being slammed by drivers crossing the fog line, they should make riders feel a little safer by providing more space.

Linn County’s widening of Riverside was a key point in the justification for ODOT’s $1 million bikeway from Corvallis to Riverside along Highway 34, completed in late 2015. The 34/Riverside link is one alternative to the Albany-Corvallis bikeway in the Highway 20 corridor, which Benton County is still trying to build.

Once Phase I of the Riverside project is finished next year, Phase II presumably will cover the rest of the six-mile road to Highway 34.(hh) 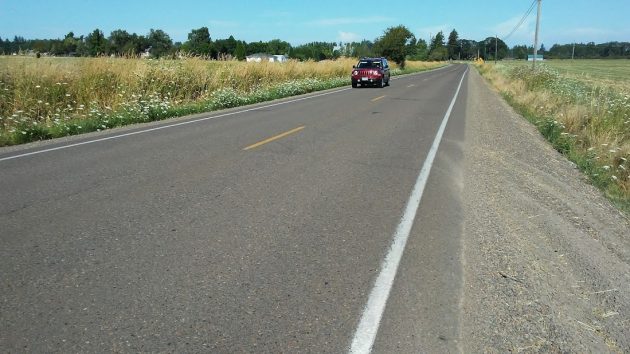 Parts of Riverside, like this one, have very narrow paved shoulders.