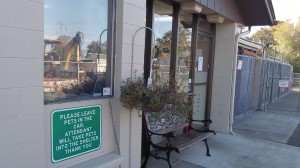 The office of the Linn dog pound on Ferry Street.

Linn County is making a sensible change in its program dealing with problem dogs and other animals. It is putting the sheriff’s office in charge of the small department, which is staffed by five people and works out of the dog pound on Ferry Street in Albany.

The sheriff’s office has been in charge of dog control office since earlier this year, when the former director retired. On Tuesday the three county commissioners agreed to stay with that change. The department will have a sheriff’s sergeant in charge and a staff of one uniformed deputy along with an office specialist, a kennel technician and a code enforcement officer.

For the sheriff’s people, this is a logical extension. They already deal with all kinds of animal problems, and having the sheriff in charge of dog licensing might just jack up the rate at which dogs are properly licensed. From the public’s perspective, the arrangement promises a better setup because the sheriff is elected by and directly responsible to the people. Experience with Linn County sheriffs, up to and including the incumbent and the successor he has recommended, says this is reflected in how they treat members of the public: With service uppermost in their mind.

With the sheriff in charge, no one who has done nothing wrong is likely to get chewed out at the dog pound, as a couple of local news people were by the former director during the controversy about Blue. Speaking of which, anybody know how Blue is getting along? And where? (hh)