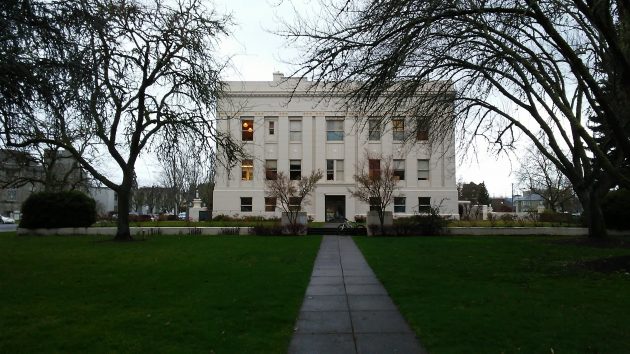 This is the east side of the Linn County Courthouse, and county officials are proposing to expand this side with a new wing to provide more space and better security for the state courts.

I first heard about this from Commissioner John Lindsey on Tuesday when he appeared on KGAL’s “Valley Talk” with me and Jeff McMahon, the daily program’s host. (I’m Jeff’s co-host on Tuesdays. The hour-long chat program starts at 9:05 each weekday.)

On Wednesday, county Administrative Officer Ralph Wyatt outlined the courthouse plan for me.

Linn County hopes to get partial funding under a 2014 state program to help counties build or replace courthouses. The current idea is to build a three-story wing on the east side of the 1939 courthouse. The new wing would look similar to the 1961 addition on the west side so that the whole building would look like this:

The new wing would take up some of the space of the park-like grounds facing Ellsworth Street, but most of the biggest trees would remain. The new construction would extend a few feet past the retaining wall you can see when you look past the house plant toward Ellsworth from the window of Wyatt’s courthouse office: 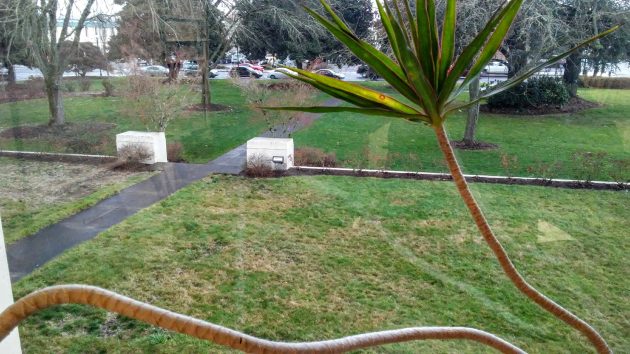 The arrangement would provide the security the courts want and, at the same time, preserve unrestricted access to other county offices including the clerk’s elections and records sections, as well as the tax department, planning, and the board of commissioners itself.

Besides adding the wing, county officials want to make the existing courthouse safer in case of an earthquake. The new wing might cost around $25 million, and the seismic upgrade another $5-10 million.

The state program pays half of new courthouse projects that meet a set of conditions. It’s not clear the Linn proposal meets them, and if not, the legislature may be asked to amend its authorization of the program.

Linn County and other plaintiffs recently won a $1 billion judgment in their timber lawsuit against the Oregon Department of Forestry. Unless the state forgoes appeals and instead settles the case by paying at least some of the judgment, the county likely would seek a bond issue to cover its share of the cost of the courthouse expansion.

The new wing would actually be a separate building connected to the courthouse on the first and third floors. Construction conceivably could start a year or two after the state comes through and local funding is approved, by voters if its a bond issue. No one knows now when that might be. (hh)