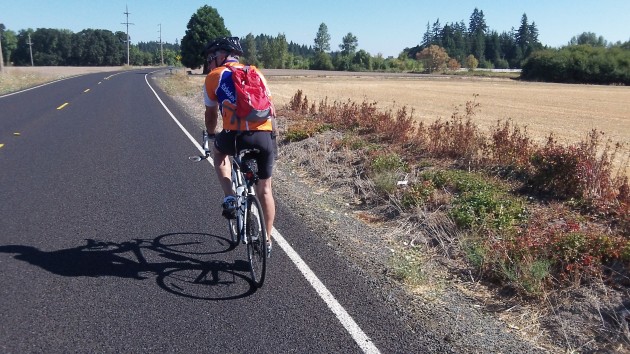 On Independence Highway, the formerly wide shoulders will be restored.

On Sunday I wondered where “the bike lane” went and complained that it was gone. Now I can report that Benton County obliterated it by mistake and intends to make it good next summer or late spring.

This was not an actual, designated bike lane. Instead it was a paved shoulder, wider than normal for Benton County roads, on both sides of Independence Highway from Camp Adair Road to the northern county line. My neighbor and fellow cyclist, Tom Gaulke, had told me that the wide shoulders had disappeared, and on a ride Sunday we checked it out and got some pictures.

At a meeting on other subjects Tuesday, I asked Benton County Public Works officials about this. They checked into it and got back to me on Wednesday. “We made an error in striping,” Laurie Starha, the department’s survey program manager, told me when we connected on the phone on Thursday.

That segment of Independence Highway received a pavement overlay some years ago, and at the time the county purposely widened the shoulders there. But when the county road stripers came along a few weeks ago after the road got a chip-seal treatment, they put the fog line near the edge as though the wider shoulders weren’t meant to be there.

Starha says that with a new chip seal, road paint typically doesn’t last long, so there likely will be a need — and thus an opportunity — to paint new lines in 2016. That’s when they’ll spread fresh oil on the shoulder and put the white stripe where it belongs, restoring the previous width.

That, anyway, is the plan, and the Benton County folks impressed me not just because they looked into it, but also because they did so quickly and came up with a reasonable fix. (hh)