One gull was taking a breather atop the light, but dozens of others were circling the Albany Fred Meyer parking lot the other night. And some were swooping menacingly low. So, naturally I thought of Tippi Hedren.

Gulls are nothing unusual in the valley, especially in winter. They mostly live along the coast, sure, but they also migrate. And maybe this flock — I think they were glaucous-winged gulls — was on its way somewhere. This was before the start of the recent valley winter storm, and maybe they got wind of the forecast and were preparing to get away.

Gulls, I read when I looked it up, prefer open areas where there’s a good chance of getting something to eat. That evidently includes shopping center parking lots, especially if there’s a burger joint nearby. Although in this case, after a lot of circling and swooping, much of the flock seemed to light on the roof of Bi-Mart across Clay Street. It’s hard to imagine what they hoped to find to eat there.

As for Tippi Hedren, she became famous when she starred in Alfred Hitchcock’s “The Birds” in 1963. Nobody who saw the movie will ever forget it. The actress is 86 now. As it happens, she’s published a memoir and was in the news just last month concerning her revelations about Hitchcock, the old goat. She devotes her life and money to saving wild animals, especially lions and tigers. I don’t know what she thinks of gulls, but in case she’s not overly fond of birds in general, I understand. (hh) 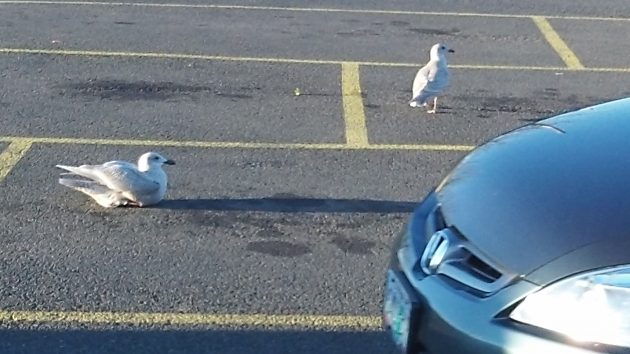 These gulls were occupying Albany parking spaces in January 2015.