Like the air now, Cox Creek Path is clean 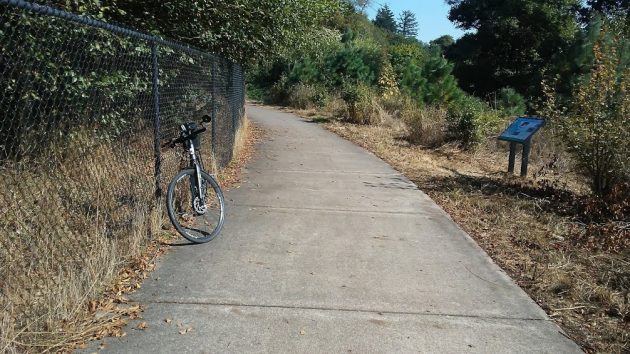 No more weeds: The Cox Creek Path on Sunday afternoon.

Now that we have clean air again, the bike took me down the Cox Creek Path in Albany on Sunday, and the air wasn’t the only thing that’s been cleaned up. The path was too.

Two months ago I ran a photo of weeds choking much of the path, encroaching on it from both sides. It still looked like that for a time after that. But by Sunday, somebody had gone the length of the path and cut back the weeds or ripped them out.

This morning, Monday, I learned from Rick Barnett of Albany Parks that the work was done by a Linn County Sheriff’s Office inmate work crew, under contract with parks. “The reason it was bad earlier was they couldn’t put crews together because of Covid,” he said. “Now they have worked out a way to put small crews together.”

Take a look at the cleaned-up route:

We start on the one-lane bridge on Waverly Drive, which is on Millersburg’s list to get fixed one of these years.

Then, on the right, we pass the sign the Calapooia Watershed Council put up a few years ago to explain the history of Cox Creek and the small dam that was there once.

And finally we end up on Salem Avenue opposite Waverly Lake.

I’m explaining all that in words because when the camera is mounted in its waterproof housing on the bike, the microphone picks up no narration. All it picks up is the mechanical noise of the bike. (hh)
Posted in: Uncategorized

2 responses to “Like the air now, Cox Creek Path is clean”