Lights and sirens from the rear 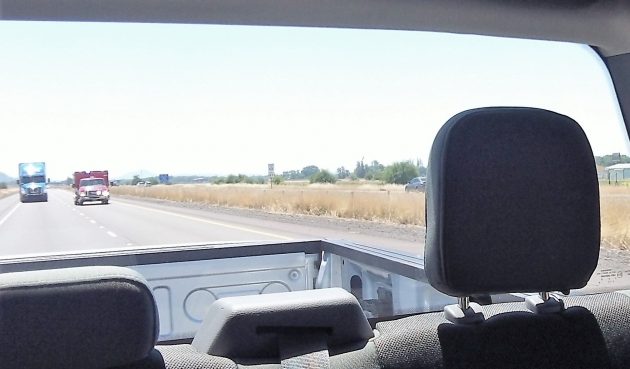 That’s an ambulance hustling north on I-5 toward the Brownsville exit Monday afternoon.

I wasn’t sure what to do when, driving up I-5 from Southern Oregon Monday, I heard a siren and saw an ambulance coming up from behind. I didn’t think the standard instruction in the Drivers’ Manual — pull to the right and stop — made any sense in this case.

Nobody else on the freeway that afternoon thought so either. Certainly the driver of the 18-wheeler in the snapshot above didn’t, because I didn’t sense him slowing down. And since the left lane was open, why should he? Why should anyone as long as the emergency vehicle, the ambulance in this case, could go as fast at it dared and there was nothing in its way?

Stopping on the freeway shoulder always seems like a risky thing to do, especially when it’s not necessary to let emergency vehicles get through easily, safely and fast. But The DMV’s Drivers’ Manual doesn’t say anything about freeways being a special case when emergency vehicles are concerned. In fact, the manual is a little vague. On the one hand it says: “When you see or hear an emergency vehicle warning, you must immediately drive as close as you safely can to the right side of the road and stop.” But then it explains: “Do not drive or stop in a way that interferes with these vehicles.”

So if you’re going the speed limit (ahem!) in the right lane and the left lane is clear, there’s no reason to stop because you’re not in the fire truck’s or ambulance’s way, are you? Well, I wish the next edition of the manual would try to clear that up. Or maybe, when the freeway is clear and they can go as fast as they want, ambulance drivers might want to leave their lights and sirens off. (hh)


3 responses to “Lights and sirens from the rear”