Lift your eyes to the tangled web overhead 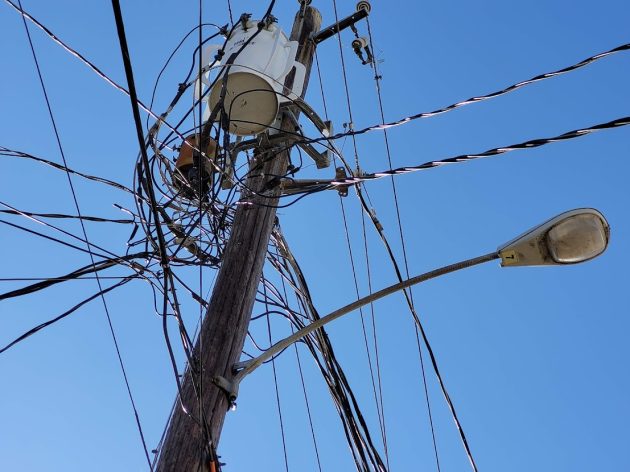 To the casual observer, this doesn’t look like the most streamlined wiring setup imaginable.

We rarely lift our eyes to notice what’s overhead. Try it sometimes, and you might be amazed that the bewildering arrangements of electrical and communications lines actually still seem to do the job.

A couple of weeks ago I was in the downtown Albany alley that runs from Ellsworth to Broadalbin Street, between the backs of buildings that front on First and Second avenues. That’s where I pointed my phone skyward and took the photos you see here.

The tangled wiring is not causing any problems, as far as I know. If it was, the customers served by these wires would notice and complain. But they don’t, so we have to assume that no matter how confusing it looks to the inexperienced eye, the wires deliver the power and the internet and phone connections that businesses and residents want.

As it happens, removing the clutter of overhead utility wires used to be a thing, a cause, among people interested in city planning.

The subject is mentioned several times in the urban renewal plan that the Albany City Council adopted in 2001. That’s the plan that created the Central Albany Revitalization Area, with its list of 51 potential projects and activities to be undertaken over the ensuing years.

No. 30 on that list was “Overhead Utilities.” And it said, “Where feasible, place all currently overhead utilities underground. In all areas, reduce clutter of overhead lines by coordinating drops, etc.”

Like with most of the items on that list of projects, nothing happened with this one. And now that CARA is trying to wrap up the renewal program with three big projects (the riverfront renewal and the St. Francis and Wells Fargo restorations), there’s no chance anybody is going to worry about these rats’ nests of overhead wires.

Which is just as well. Nobody notices these things unless they look up. (hh) 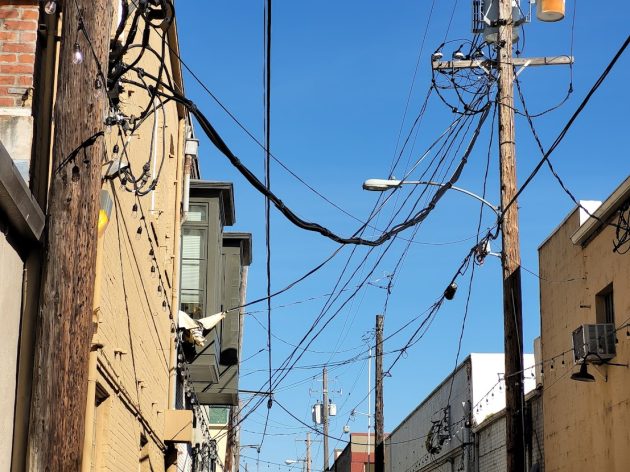 Here’s another view of the overhead wiring setup in the same downtown alley.


5 responses to “Lift your eyes to the tangled web overhead”