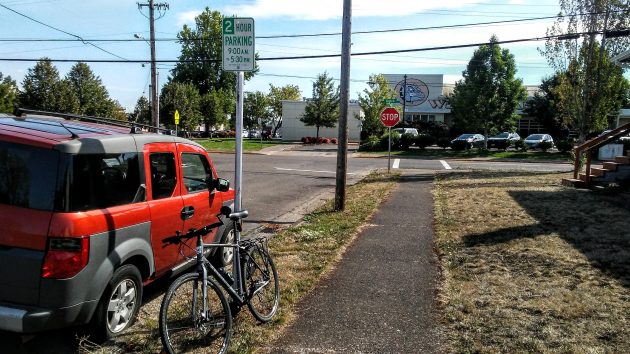 Umatilla Street is one of four street segments across from West Albany High School where street parking is restricted.

Because of all the construction at West Albany High, students driving to school this year are having more trouble than usual finding a place to park. A proposal to help them by temporarily suspending parking limits in the neighborhood north of the school found no favor with the city council this week.

The idea, brought to the council Monday by Deputy City Manager Jorge Salinas, was to put bags over the no-parking signs on sections of four streets across Queen Avenue from West.

But Mayor Sharon Konopa and Councilor Bill Coburn, among others, voiced objections. Konopa recalled the time many years ago when neighborhood complaints about students parking on their streets caused the city to impose limits. On Monday, the council’s concerns included parking for the residents, access by emergency vehicles, and where to put the trash bins on pick-up day. 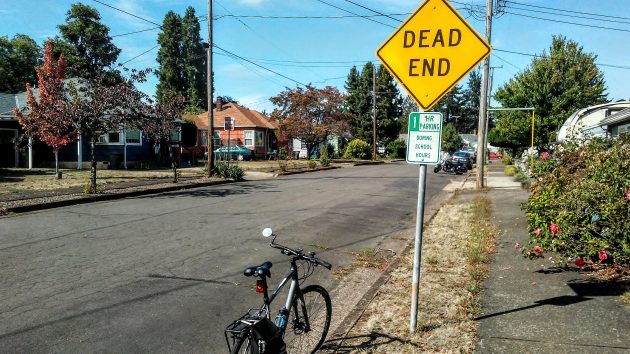 One hour is the limit on this end of Liberty. 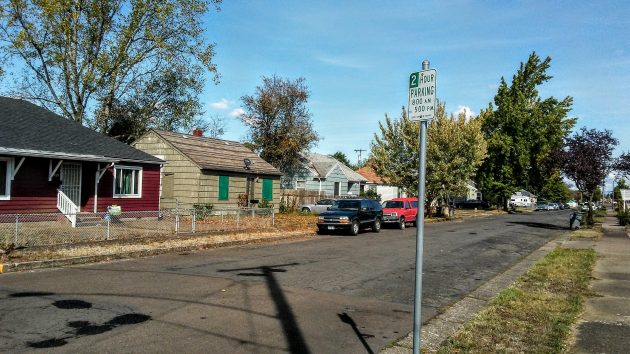 On 16th at Umatiilla, the limit starts at 8 a.m., but does that mean the entire block?

So what happened on this since Monday’s council work session?

Salinas told me he got back in touch with the school district. He learned that the West Albany administration told the juniors and seniors that during the construction period they need to park on Elm Street, including the lot on the west side of Elm, or on Liberty on the west side of campus. “And if they park elsewhere they need to be good neighbors.”

Salinas also said the police department had contacted the contractor. Workers will park in the construction zone parking lot instead of taking up available slots on the streets.

Looking around the neighborhood on Wednesday afternoon, I found different no-parking rules on the streets north of the school.

On Lawnridge, weekday parking is limited to two hours between 9 and 4. One block to the east on Liberty, a dead-end street, the limit is one hour during school hours. Another block east, on Takena, directly across from the school, there are no parking restrictions at all, at least no signs that I could see. Another block east, on Umatilla, parking is limited to two hours between 9 and 5:30. Finally, on 16th Avenue at Umatilla, the posted limit is two hours from 8 to 5, but it’s unclear how far this extends.

No word on whether the variety of parking limits has led to confusion among high school students, residents, or anyone else. In any case, Salinas says, “At this point, APD plans to continue to issue parking citations for violations reported in this area.”

So try to pay attention to the signs. Or ride your bike to school and forget about having to park your car. (hh)


7 responses to “Lift parking limits near West? Council says no”