Raising those manhole covers: Coming up 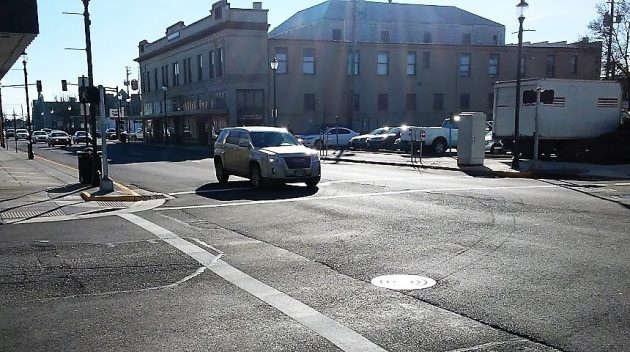 This manhole cover on Lyon Street doesn’t look bad, but others are lower in the new pavement and will be brought up to grade.

As for the bumps in the new pavement where there are manhole covers on Albany’s downtown Highway 20 couplet, the city says ODOT won’t fix them but the city will.

The bumps are where about half a dozen manhole covers and water valve lids were not raised in order to be level with the new layer of asphalt when ODOT resurfaced Lyon and Ellsworth streets downtown in 2018. This has led to a few complaints and questions. Drivers don’t expect potholes in newly paved roads.

When I asked ODOT about this last November, a spokesman told me that as far as he could learn, the agency was working on a timeline to get the repairs done.

Albany Councilman Bill Coburn brought it up at a council work session Monday. Whatever happened to that project, he wanted to know.

Jeff Blaine, in charge of public works engineering and community development, told the council that ODOT didn’t do adjustments of this kind. So no, the state wouldn’t fix the bumps, but the city would step up.

Later, I asked for and got an explanation from City Engineer Staci Belcastro, who replied: “ODOT maintenance completed the asphalt overlay but their contract did not include valve and manhole adjustments. City staff is working with ODOT to permit the work and will secure a contract to have a number of valves and manholes adjusted to grade on Lyon and Ellsworth Street. There are also manholes owned and operated by Century Link that will be adjusted to grade. We anticipate this work will be completed in March or April of this year.”

There are, Belcastro added, one manhole on Ellsworth and at least six manholes and valve boxes on Lyon Street that will need to be adjusted.

According to the latest ODOT table of traffic volumes, the downtown couplet of the Albany-Corvallis Highway carried 31,000 vehicles a day in 2017, some 18,300 going south on Ellsworth, and 12,700 headed north on Lyon. That’s a lot of backsides that will get bounced around less once those iron covers are raised. (hh)

This story has been edited to clarify the number of covers to be adjusted.


23 responses to “Raising those manhole covers: Coming up”