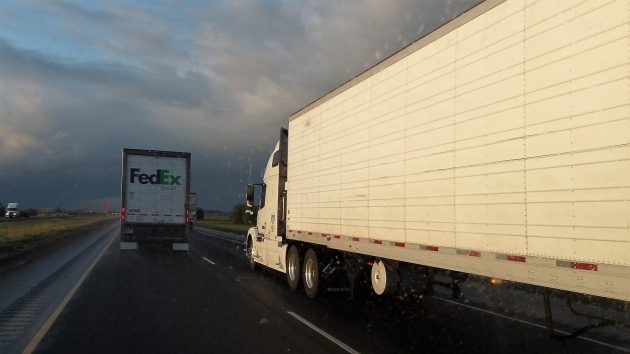 Afternoon truck traffic on I-5 south of Albany. (File photo from April 2015).

Freeway drivers in Albany and elsewhere on the Oregon interstates will be interested in the state’s proposal to raise the speed limit for trucks. If it goes through, this should ease the congestion caused by slow trucks overtaking each other at leisurely speeds.

ODOT is doing a study on “whether or not truck speed limits should be raised on the interstates,” and the agency says it wants public input.

The study concerns those long sections of I-5, I-84 and I-205 where the speed limit is 55 mph for trucks and 65 mph for everybody else. The proposal under consideration is to raise the truck speed to 60 mph but leave the general limit unchanged at 65.

ODOT’s Speed Zone Review Panel has scheduled three public meetings to hear comments. The first is on March 14 in Salem, at 5:30 p.m. in the ODFW Commission Room at 4034 Fairview Industrial Drive. The others will be in Hood River on March 20 and Medford on March 22. Written comments can be emailed to interstatespeedcomments@odot.state.or.us.

Once the speed panel reviews ODOT’s engineering study and considers public comments, the panel will make a recommendation to the Oregon Transportation Commission, which has the final say unless the legislature says otherwise.

On some of the highways in central and eastern Oregon, speed limits have been raised. But the commission has insisted on keeping the freeway speed limit at 65 in western Oregon even though it has the authority to raise it to 70 mph.

On Interstate 5 from the mid-valley south to Medford, what the speed signs say and what the traffic does are rarely the same. The average speed of passenger vehicles hovers somewhere north of 70 mph. Trucks are slower, but usually not as slow as 55.

The speed difference between trucks and other traffic has two effects. One is that in moderately heavy traffic, the capacity of a two-lane freeway is cut in half — to one lane only — as everybody stays in the passing lane. Nobody wants to be stuck behind a truck, unable to get back in the other lane. The other effect happens when one slow truck is passed by others just a tiny bit faster. The left lane clogs up even more, testing the patience of drivers and putting their good sense to the test.

Raising the truck limit by 5 mph won’t eliminate the problems but should help. Ideally, though, all the traffic on our interstates ought to be legally able to move at the same speed. Then drivers could comfortably stay behind trucks in the right lane without feeling they are stuck. (hh)