Let’s hear it for tan lawns 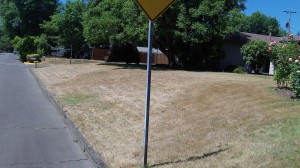 Who says lawns have to be green in order to look presentable? In and around Albany this time of year, lots of residents have decided that tan or light brown looks just as good.

As usual in the summer, western Oregon has had no significant rain for several weeks. There are good reasons not to fight nature and keep the grass looking lush and green in the face of our regular summertime drought.

One is conservation. Water is a precious resource, so why pour it on the ground when no food production is involved? And anyway, we know from experience that come October the yard will green up again. Three or four days of moisture from the sky usually does the trick.

The other reason is the price. Three years ago the city of Albany compiled a comparison confirming that Albany had among the highest water rates in the state. This year the rates went up 2 percent, and the typical residence pays about $45 a month for water alone. This, according to a table published by the Eugene water board last winter, again puts the Albany water price near the top of the list. And in parts of Benton County, the basic monthly Albany bill is around $67, again for water alone. All of which explains why tan looks pretty good when it comes to your yard. (hh)

From Michele LaBounty, via Facebook: Absolutely!  Too many people here in the High Desert dump thousands of gallons of water on lawns when much of the natural vegetation is sagebrush and junipers

From Brian C. Lee:  The City of Corvallis’ water conservation expert used to refer to them as “golden” rather than tan.  I noticed the City of Corvallis is now using “golden landscape” on their website. http://www.corvallisoregon.gov/index.aspx?page=1013.
I found that not watering the lawn also inhibits the growth of weeds and greatly reduces the need to mow.  Those weeds that do grow are easily spotted since they are green against the golden brown background of grass.  Not watering also makes it harder for cranefly larva to survive

From Ted Salmons: Albany seems to have it good if those prices are accurate.  I live in Lebanon.  It’s just my wife and me.  I have a small (about 400 sq. ft.) front and side yard that I keep watered.  I’d love it if my water bill was less than $100 in the summer.  It’s always odd (read terrible) that my water bill is more than my gas and electric bills combined from NW Natural and Consumers Power.  There’s something badly wrong with a utility that seemingly overpriced.

From Ted Salmons on July 30: I’d like to post an addendum to my previous comment.  In his posting about Albany water rates I didn’t realize Mr. Hering was discussing only the water charges for Albany.  I assumed (almost always a bad idea) he was talking about water and sewer charges combined.  That is where I got my $100 plus average charge for the summer.  My actual water bill for May-June was $53.51  The sewer bill was $52.93.  Sewer bills in Lebanon are based on a customer’s average usage for the previous October-March period.  They do that as not to “penalize” people that do water some or all of their yards during the summer.  Although, that does show that for several months of the year (non watering times) a customer’s sewer bill can actually be higher than their water bill.  And as a side note they figure your water bill based on the number of full units of water you use.  Units?  Does anybody relate to units?  In their defense though; on the back of the bill does explain that a unit is 100 cubic feet of water which equals 748 gallons.  Couldn’t they have just stated it in gallons in the first place?