Let’s hear it for farmers 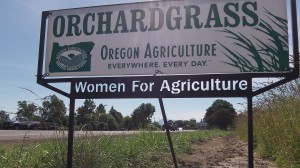 There should be more helpful signs like this one along Highway 34 near Orleans Road.

It’s getting close to the harvest season in Oregon’s mid-Willamette Valley, and city people ought to take a greater interest than most of them do. Why? Because without the crops growing in the vast fields outside of the towns, this would be an even poorer region than it is. Consumer spending may be what keeps the economy afloat, but without the production of basic commodities there would be less money to spread around.

When you look on a map, you see that probably around 80 percent of Linn County is forest and farm land. Federal forest policy over the last 30 years has killed the forest as a source of economic wealth. Which leaves the farms. What they grow and ship around the country and the world is a significant source of outside income, on which a lot of service and retail jobs rely.

Mid-valley farmers don’t toot their own horn nearly enough. Most of them don’t even put up those helpful signs telling city people what crops they are looking at as they drive by at 55 miles an hour. Most growers probably just want to be left alone so they can do their work. But during the harvest season, when implements lumber along county roads, the least we all can do is pay close attention while driving. Otherwise people are likely to get hurt. (hh)

Christine Ruck responded, via Facebook: New signs with crop names have been going up this year. Lots of them are on Hwy 34.  They also contribute substantially to the education of the kids in Linn County. Everybody’s kids, not just their own. That’s worth a round of applause.