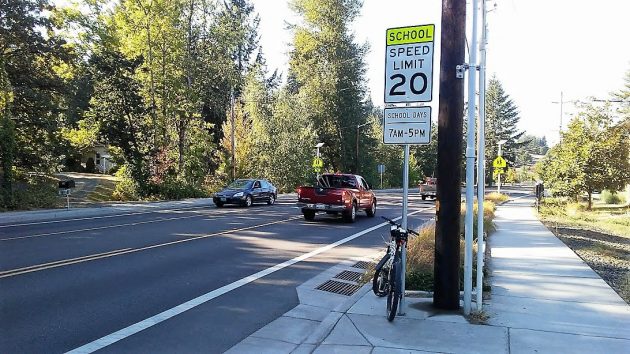 It is just before 5 p.m. on the first day of school, so those drivers on North Albany Road presumably are observing the 20 mph limit, even though as far as the eye can see, there’s a total absence of pedestrians connected to any school. I took the photo Tuesday to illustrate the stupidity of our present school speed zone law.

The legislature amended the law in 2005. The statute is incomprehensible by normal people, so ODOT translated it. The speed limit in school zones on roads adjacent to schools is 20 mph when the sign has a flashing yellow light, or from 7 to 5 on school days. At crossings away from school grounds, it’s 20 mph “when children are present.”

So exactly when are children “present”? ODOT says it’s when they are in a crosswalk or waiting on the curb or shoulder to cross, or when a crossing guard is present.

So evidently, under the law, children are not “present” even when dozens of them are walking along without showing any signs of wanting to cross. This makes no sense at all. A normal person driving along Quarry Road, for example, would consider children to be present when he sees a bunch of them near the road, regardless of what they were doing.

The other thing that makes absolutely no sense is to impose a ridiculously low speed limit on major roads when there are no children around at all — no one waiting to cross, no one just ambling along, no one goofing off with his friends. As, for example, on Southeast Waverly Drive and Northwest North Albany Road almost any time of the day.

Ominously, ODOT warns  online that violating the school zone speed can cost you as much as $870. All the more reason to have a sensible law.

A sensible law would be what he had before lawmakers screwed things up in 2005. The signs warned us to slow down to the posted school speed when children were around, meaning when drivers could see children near the road, or in it.

That meant we slowed way down when passing schools in the morning, and after classes were dismissed. But we didn’t have to worry about school speeds the rest of the time, when all the little sweethearts were safely ensconced in their classrooms a quarter mile away from any possible harm that could befall them on the street. (hh) 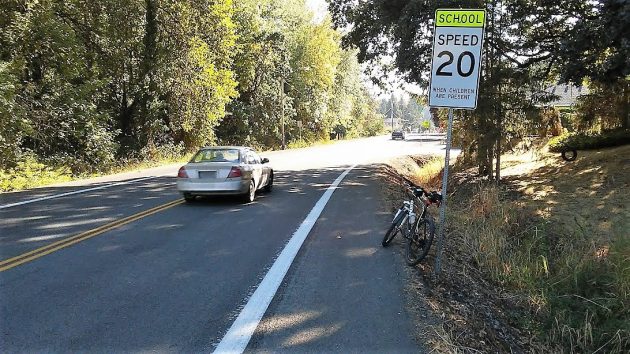 On Nothwest Quarry Road, near a crossing to and from North Albany Middle School.