Let’s get them ‘flying’

It looks as though it crash-landed. 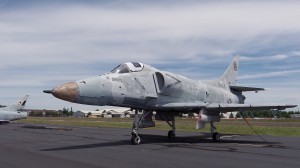 Ready for take-off? Not quite yet.

It’s taken a lot longer than expected for three vintage warplanes to be displayed at the Albany Municipal Airport. But two of them sit there now, looking a little as though they’ve been through a crash.

It was in March 2007 that Dick Ebbert, the city’s economic development director and airport manager — and a Marine Corps pilot during the Vietnam War  — briefed the city council on plans to bring to town three surplus A-4 Skyhawks. The planes had been mothballed in Arizona, and the federal government had agreed to lend them to the state of Oregon for display in Albany in return for a $10,000 fee.

Current airport manager Chris Bailey says another condition was that the planes be put on display within a year. Volunteers and airport supporters trucked the dismantled jets to Albany, and since then more volunteers have worked on, among other things, putting them back together. The plan has been to show them in a static display, with two mounted on poles in various stages of taking off. Much work remains to be done, and again it falls to volunteers.

Bailey has no estimate of when the project might be complete. She says hiring it done would probably cost tens of thousands of dollars, and so far the city has taken no steps in that direction. Looking at these tattered birds on the tarmac (the third is in a hangar), the airport might want to budget some money to get this done. (hh)