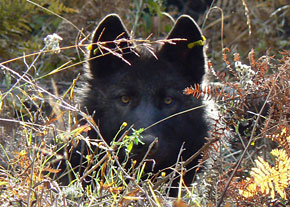 ODFW has this portrait on its web page devoted to wolves.

In northeast Oregon’s Wallowa County on Thursday, state employees shot and killed four wolves to keep them from killing more livestock. That’s what happened, according to the news, but that’s not what officials and publicists called it.

In a press release announcing the impending shootings, the Oregon Department of Fish and Wildlife said it had “confirmed five livestock depredation incidents on private land within the past three weeks by some wolves in the Imnaha pack…” Translation: Wolves had killed five calves or lambs or injured them so badly they had to be put down.

ODFW, the agency said, “will lethally remove depredating wolves to reduce the likelihood of further losses.”

Could we just describe things in plain English, please? “Lethally remove” is too vague a euphemism for “kill.” It could mean chasing the animals with helicopters until they expire from exhaustion. Or it could mean trapping them and then killing them in a cage with poison gas.

The Oregon Cattlemen’s Association was even more circumspect in its language. “On Thursday,” the association said, “Oregon Department of Fish and Wildlife made the difficult decision to enact lethal take on the Imnaha pack after the pack committed five depredations on livestock within the month of March.”

“Enact lethal take”? And what had the wolves done? They had “committed five depredations.” Bad, bad wolves!

Wolves killing livestock and then being killed in response are the predictable result of a conscious decision by wildlife officials some years ago reintroduce these predators in the wilds of Idaho, where wolves had been as extinct as they were in Oregon. Some of the wolves migrated to Oregon, where they have grown in number to the point where the state removed them from the list of endangered species, a decision the legislature has just confirmed.

A couple of years ago the country was excitedly following the wanderings of a lone wolf from Oregon to California and back. And now we’re to the point where the state has to kill its relatives because, like all creatures, they like to eat.

Let’s try not to be sentimental about this. We kill animals all the time – wild ones like crabs and fish and deer and domesticated ones raised for the very purpose of slaughter. If you had a burger at McDonald’s, as I did today, an animal was killed — after a short and mostly miserable life — to make it possible. So why the fuss over a few wolves?

But if we’re gonna kill ’em, let’s at least use the right words in describing what we do. (hh)