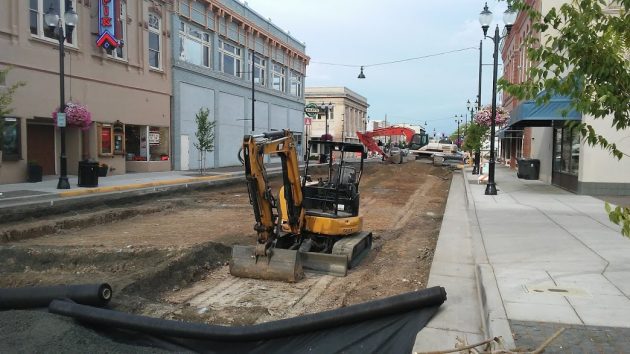 After hours on Wednesday: Reconstruction of Second Avenue downtown, one of the last parts of CARA’s streetscape project.

Now that the downtown streetscape project is winding down, Albany’s urban renewal agency will have to decide what to do next. One potential idea: Put on a push to improve the neighborhood east of Lyon Street by rebuilding the streets and upgrading the houses that need it.

On Wednesday, the advisory board of the Central Albany Revitalization Area got a refresher on what urban renewal agencies in Oregon are all about. Among other things, within urban renewal districts, they can spend money on any rehabilitation or conservation project. They can acquire real estate and clear areas they’ve acquired. They can install, construct or reconstruct streets.

Albany’s urban renewal spending is limited to the maximum indebtedness set in the urban renewal plan in 2001: $56 million. Of that amount, $37.7 million was left to spend in June 2016. After the streetscape project, for which the city borrowed $8.4 million from the state, that leaves just under $30 million.

Albany might look and see what Medford has just done. In March, Medford amended its urban renewal plan by allocating almost $18 million to the Liberty Park area described in the Mail Tribune as crime-ridden and poor. (“Nice park, crappy part of town,” someone commented online.) The Medford council, acting as the urban renewal agency as in Albany, said the money should be spent on street improvements, a program to replace sewer laterals, housing assistance, and other things.

The part of the central Albany urban renewal district east of Lyon Street is overdue for some concentrated attention from CARA. There has been a modest program to encourage people to buy old houses in the Hackleman Historic District and restore them as single-family homes, but it fizzled.

So a concentrated push, like the one in Medford to lift up the area around Liberty Park, would be in order for the area east of Lyon between the river and the Union Pacific main line. They might start by rebuilding the streets. That would give people with money the idea that if the city invests big money there, they should too.

That’s not the only kind of thing CARA should do. Other possibilities? Buy some under-used property downtown and get somebody to build something interesting. How about a downtown hotel and parking structure to accommodate the throngs of carousel tourists we were told to expect?

Over the years the CARA board’s monthly meetings have all too often been consumed by discussions about little things, like whether somebody should get a loan or a grant to put up an awning, and whether one bid is enough or two should be required. (I’m exaggerating, but not by much.)

Seventeen years into its life, it’s about time for CARA to launch big things and then dissolve when those are done. (hh) 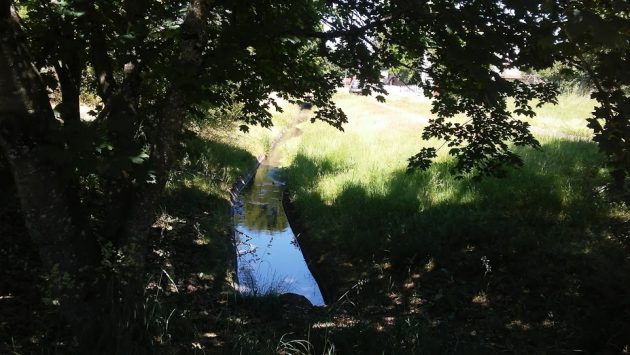 CARA’s east Albany program might include restoring the pitiful Thurston Street ditch as a regular canal.


18 responses to “Let CARA think big and then quit”