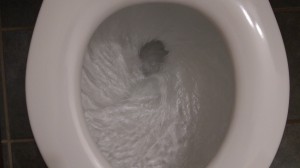 Our Oregon legislature is filled with earnest legislators who like nothing better than to make new laws. So it won’t be a complete surprise for you to learn that they intend to tighten their control of, among many other things, the amount of water you flush down the toilet.

On April 12, according to the legislative information system, the Senate committee on the environment and natural resources endorsed Senate Bill 840, which “imposes new water use limitations on fixtures” and would take effect in 2016.

As it turns out, the flushing capacity of Oregon toilets and urinals is already a matter of state law. The law says the average volume of water in new toilets shall not exceed 1.6 gallons per flush. The bill would cut that maximum average flush back to 1.3 gallons. As for urinals, the bill would reduce their legal water use by half, from one gallon to half a gallon per flush. That’s for a floor-mounted urinal. For one that’s hanging on the wall, the average flush would be cut back to 0.125 gallons.

Not content with flushing, our lawmakers are also planning to reduce the allowed flow rate for new faucets in your bathrooms and elsewhere in your house. The legal flow rate of shower heads, thankfully, would be left alone. The goal is water conservation, of course. But how do these standards help if they cause people to flush two or three times or wash their hands twice as long? (hh)