Left-lane bill: Who needs it? 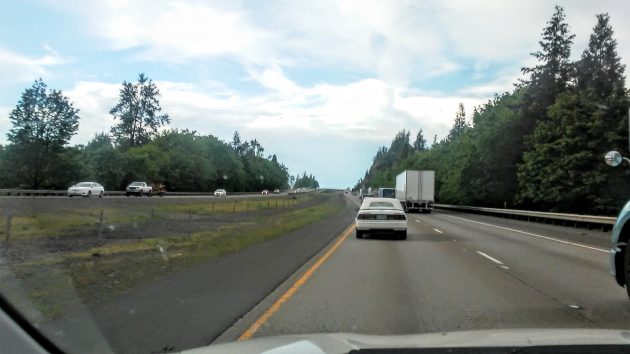 Driver’s view of I-5 traffic northbound somewhere near Cottage Grove.

Returning to Albany Thursday afternoon from Southern Oregon, I could see no need for Senate Bill 532, the “don’t-hog-the-left-lane bill.” All of us on the freeway did just fine without it.

Maybe that’s why the bill, after clearing the Oregon Senate, was still stuck this week in a committee of the House.

The bipartisan bill would prohibit driving in the left lane, except when passing, on multi-lane highways where the speed limit is 55 mph or greater. But the amended version, SB 532-A, contains many exceptions. One says: “When an obstruction or condition exists making it necessary to drive in the left lane.”

A “condition”? “Necessary”? Who decides? Laws are supposed to tell people just what is not allowed. This bill fails the test.

As a practical matter, if drivers hang in the left lane longer than others behind them think proper, there’s usually a reason, the main one being that there’s a big truck in the right lane, or a bunch of trucks. If the right lane is open, drivers who don’t want to wait can pass the slower vehicle on the right. Or they can wait a bit. So what exactly is the problem that the bill is trying to fix?

The House Committee on Transportation Policy held a hearing on the bill on April 26. One of the witnesses said that in Washington state, which has a law similar to the Oregon bill, the highway patrol pulled over left-lane drivers for “impeding traffic” 13,000 times in a year. Is that what we want, thousands of bogus reasons to write citations?

It may be annoying for a few seconds to get stuck behind a clump of traffic that moves only slightly faster than the speed limit. But among life’s annoyances, it’s pretty minor. So my suggestion to the legislature: Tell ODOT to put up a few more signs that say “Slower traffic keep right.” And forget about threatening Oregon drivers with tickets costing up to $250, as this bill does. (hh)