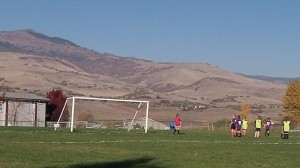 Even if it’s not children’s soccer, we all might benefit from daylight time all year long.

Daylight saving time is about to come to an end for the year, so naturally I feel another rant coming on.

On Nov. 3 we are supposed to regain the hour we lost last March. But mucking about with the time — why do we do this other than that Congress decided long ago that we should?

Summer time was supposed to save energy, principally in lighting. But I doubt that it saves any electricity. Regardless of what season it is, for example, I turn on the bathroom lights in the morning before taking a shower. And later I use the toaster, without regard for what it says on the clock.

So if it doesn’t save energy in the summer, what else does daylight saving time do? It makes some people sick when it starts. And others when it ends. Apparently our bodies don’t take it lightly when we mess around with the daily rhythm of our lives.

As I’ve said before, it’s nice to have an extra hour of daylight during the summer. But it would also be nice to have it stay lighter for another hour during the winter. So what we should do, to avoid having to adjust to a time change in March and November and to benefit from more evening light, we should stay on summer time all year. (hh)

Marianne Vandenberg, on Facebook:  I agree wholeheartedly, but I must say that they tried that one year when I was living in an un-incorporated area outside of Pomona, c. 1974. Kids were walking to the bus stop in the morning in pitch black — no sidewalks or streetlights — it wasn’t very safe for them.  I go to work in the dark most of the year anyway — I’d much rather have the extra hour of daylight at the end of the day.  Arizona stays on DST year-round, why can’t we?