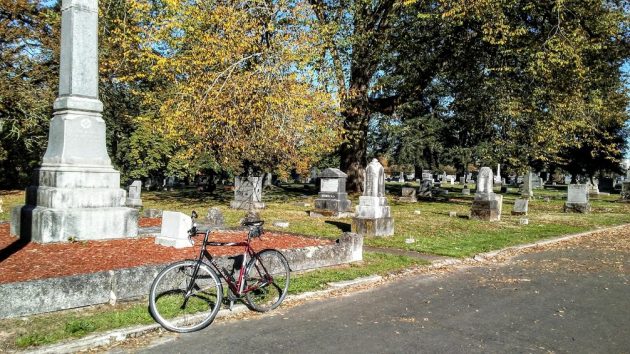 Following up on the Ben and Amanda Johnson story took me to the Masonic Cemetery off West Seventh Avenue.

There’s always more to a story, and yesterday’s piece about the Jackson County mountain named for Albany blacksmith Ben Johnson was no exception. As soon as it appeared, readers responded with additional details.

Among the items were digital clippings.

Paul Cauthorn, who contributes to a Facebook group called Forgotten Oregon, sent two obituaries, one for Benjamin Johnson from 1901, the other for his widow, Amanda Gardiner Johnson, from 1927.

Also, I got a link to a story by Cathy Ingalls that appeared in the newsletter of the Albany Regional Museum a few years back. It reported on noteworthy people buried in the Masonic Cemetery in West Albany. As their gravestones spell out, Ben and Amanda are resting there, side by side.

Both Ben and Amanda had been born into slavery. The main thing that comes through the printed words from long ago is how well known and respected Mr. and Mrs. Johnson were in the Albany community. You might not have expected that if all you knew about Oregon’s history is the narrative now making the rounds.

After reporting over Christmas 1884 that heavy snow had caved in the blacksmith shop where Ben Johnson worked, the weekly Albany Democrat reported on Jan. 16, 1885, that the “shop occupied by Ben Johnson … has been put in better condition than formerly.”

His obituary in 1901 said Johnson crossed the plains to southern Oregon with an ox team in 1853, moved to Albany in 1868, married Amanda in 1870 at the home of an Albany family, and “followed his trade as a blacksmith as long as he was able to work.”

“He had a host of friends and was highly respected by all who knew him as a conscientious, upright, industrious man,” the paper said in words probably written by Fred Nutting, the Democrat’s editor and co-owner.

Ben’s wife was held in similarly high esteem. When she died at 94, the headline on the news story about her death called her a “famed pioneer” who had often been before the Linn County public.

She too had come to Oregon on a wagon train in 1853, with a family named Deckard. She died at the home of Maude Henderson, a granddaughter in that family.

Yesterday I guessed that maybe the address of the house were she died, 807 Calapooia Street, was a mistake on the death certificate because there’s no such address. That was a case of jumping to the wrong conclusion.

There’s no such address now because where 807 Calapooia used to be, there is a city park named after the family that lived there and took care of Amanda until her death: Henderson Park. (hh)

The graves of Ben Johnson, left, and Amanda Johnson at Albany’s Masonic Cemetery. 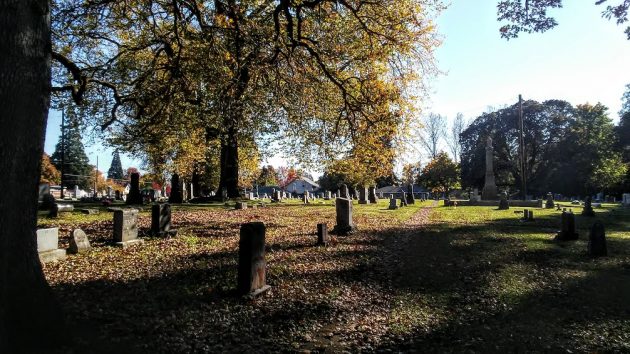 The Masonic Cemetery in West Albany on a beautiful October day. Many Albany pioneers rest there.