Launch at your own risk 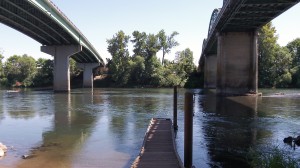 The Takena Landing dock under the Lyon Street (left) and Ellsworth Street bridges.

If you’ve thought of launching your canoe from Takena Landing Park, a note of caution. The Willamette River looks placid from afar, and even up close it seems harmless. But there’s a strong current pushing against the upstream side of the dock, made even stronger than the river current itself by the flow around the northernmost pillar of the Ellsworth Street bridge.

Normally and in most places, the river’s current is weakest near the banks, sometimes even reversing itself so you can easily paddle or row upstream. But not at the Takena dock. There, even though the river level is down, the water swirls around the bridge support and dives under the floating dock, boiling up on the downstream side where you are likely to have your craft tied up before you take off or as you come in.

At least that was the picture when I looked at it one recent afternoon. It reminded me of a mishap I had at that very spot a couple of years before. I was getting out of my canoe when I inadvertently tipped it far enough for the upstream gunnel to dip under the surface. The craft filled with water in less than a second, overturned and spilled everything in it including me into the Willamette. Unless you have a wider and steadier hull, I would give that dock a miss. (hh)