Late-night errand and where it leads 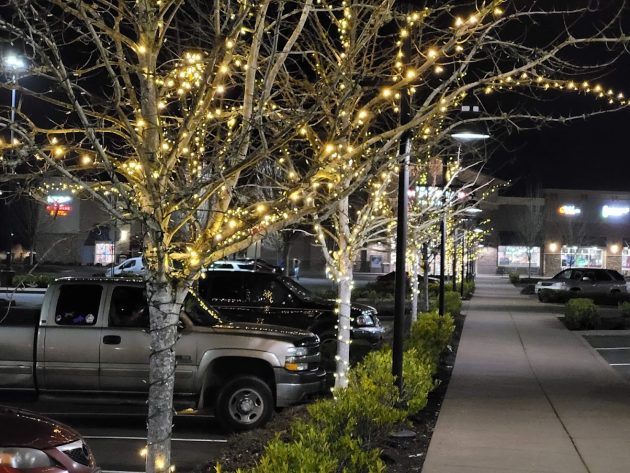 Just what’s needed to cheer you up while running an errand on a cold January night: Festive lights.

What happened, see, was that a switch went out on one of our lamps. What I discovered as a result is not earth-shaking news but may be of interest anyway.

The Ace hardware store inside North Albany Supermarket is open late, until 10, so that’s where I went. A helpful employee pointed me to the aisle where they have the kind of switch I had in my hand. Another employee joined me there, hunted around a bit and came up with exactly the thing I needed.

Already happy about the help, and glad that I had found an obscure electrical item late on a Sunday night, I was further cheered up when I got back outside and looked around. All those mall-type trees in the parking lot don’t look like much in the daytime. But with their strings of lights, they make an errand there far more inviting than it otherwise would be on a cold winter night.

I snapped a couple of shots. The lights have been there for two or three years, I think. Who’s responsible for this gesture, and for keeping them lit?

For  a number of years most of the tax lots within the North Albany Shopping Center had been owned by a company whose address was on the 15th floor of 350 Park Avenue in New York City. What I didn’t know was that this was no longer the case.

When I got home and looked it up on the website of the Benton County Department of Assessment, I discovered that the shopping center was sold on April 1, 2020. The selling price was $12,200,000, according to the warranty deed.

The owners now are six limited-liability companies all managed, according to the Oregon Corporation Division, by different people whose surname is Lindsay. The tax bills go to GAL South Street LLC, managed by Gerald Lindsay, to an address in Portland.

GAL South Street is a real estate holding company incorporated in Delaware, but since all the Lindsay managers of the various LLCs owning the North Albany parcels list the same Portland street address, one presumes it’s a Portland family that now owns the center.

I don’t know if they are the people responsible for keeping the tree lights lit this winter, but if they are, thanks. It looks good. (hh) 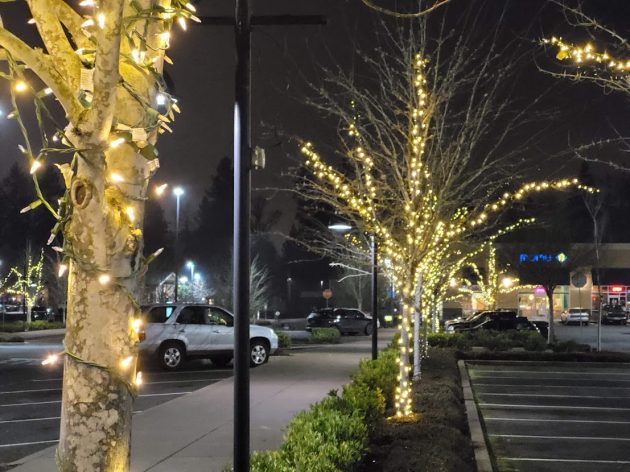 And looking in the opposite direction on Sunday night.


4 responses to “Late-night errand and where it leads”