Lanes for bikes and leaves 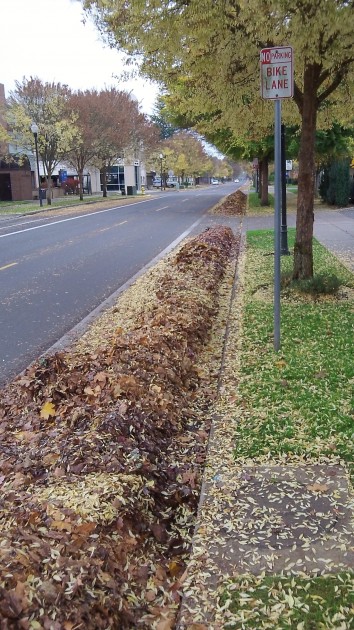 Not an unusual sight this time of year.

I’m not complaining, but does this seem a little odd? The sign on Elm Street in the block occupied by Albany General Hospital prohibits parking on the curb, presumably to keep the bike lane open for bicyclists. But blocking the lane with piles of dead leaves is OK?

This is not exactly rare this time of year on Albany streets. The bike lanes are often full of mountains of dead foliage. But it can’t be helped. This is a Tree City USA, and fall produces far too much in the way of fallen leaves to fit in the yard debris containers that Republic Services picks up ever other week.

So, where else but on the street could the leaves be piled if property owners hope for them to be scooped up during the citywide leaf pickup sweeps? (Republic Services is doing leaf pickups during three two-week periods this fall: Nov. 4-15; Nov. 18-29, and Dec. 9-20.)

Cyclists are used to the lanes being obstructed now and then — actually once a week, like clockwork, on the weekly trash and recycling pickup days. This is OK as long as motorists on streets with bike lanes realize that from time to time, bikes have to veer into the travel lanes instead. (hh)

Chuck Leland commented by email:  Seems to me that a bike, riding in the street, is much more at risk from cars than a pedestrian is at risk from a biker on the sidewalk.  I recall seeing a biker receiving a ticket from a policeman (don’t ask where or when) for riding his bike on the sidewalk.  No one walking within a few blocks.
Yet I believe Segways, those two wheel, gyro balanced riding devices that go several miles an hour without pedaling , are legal to ride on sidewalks?  I could be wrong about this but somewhere I’ve been recently allows this.
Finally, I feel bikers are more alert and concerned about what’s around them than many auto drivers.


2 responses to “Lanes for bikes and leaves”