Landmarks struggle: Is this historic?

Albany’s Landmarks Advisory Commission needs clarification on this question: When does a garage associated with an historic house qualify as being historic too, so that a demolition permit is required before it can be replaced with a larger one?

The panel held a hearing Feb. 6 on a request to replace a one-story garage at 828 Calapooia St. S.W. with a larger one that would have an apartment or “accessory dwelling unit” on the second floor. After much back and forth, the panel voted 5-1 to continue the hearing on March 6. (You can listen to the nearly three-hour audio here. The hearing on this request starts about half an hour in.)

The applicant, Steven Ballinger, told the board he had asked his architect to redesign the project to make it smaller and the new drawings were not yet ready. The continuation was intended to let the board see the revised drawings.

But the main issue occupying the commission was whether the project also required a permit to demolish the garage, built in 1927 along with the house, whether it is so closely associated with the main house that the applicant needed a separate permit for tearing it down. The discussion was back and forth, but the upshot was that the city’s development code does not appear to be clear on this.

Chairman Bill Ryals said one problem was that the inventory of buildings in Albany’s historic districts was “not very good.” He urged that the city make the inventory more accurate. Until that’s done, the commission is likely to struggle with applications of this kind, as it did with a garage-replacement request that ended up being granted on Jan. 2 after being held up for a month.

The central question: When is a structure of such historic significance that it should be preserved? “Just because something is old doesn’t make it significant,” said Ryals, an architect who has worked on some big restoration projects in Albany and elsewhere.

As for the current request on Calapooia, Ryals said he was “perfectly satisfied that it meets all the criteria” for being approved, except for the uncertainty over whether a demolition permit is required. He does not want this or any other applicant to be held up for whatever time it takes for the city to clarify its code or redo the inventory of historic structures.

The landmarks board has been under fire from some city council members for needlessly delaying renovation or replacement projects in the historic parts of town. Last year it voted to delay the demolition of three dilapidated houses at Fourth and Calapooia, a decision then overturned by the council, only to be appealed by a private citizen –to the state appeals board on land use, where the case still rests.

The council has talked — argued, really — about changing the way landmarks members are appointed, and also about repealing or amending the ordinance that granted the landmarks board decision-making authority almost 20 years ago. But there’s been no action on either change. (hh) 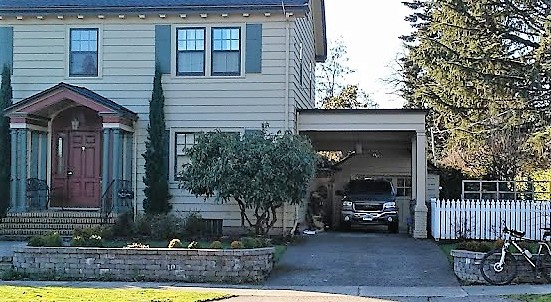 Now at issue: Replacing the little garage behind this carport at 828 Calapooia St. S.W.

19 responses to “Landmarks struggle: Is this historic?”