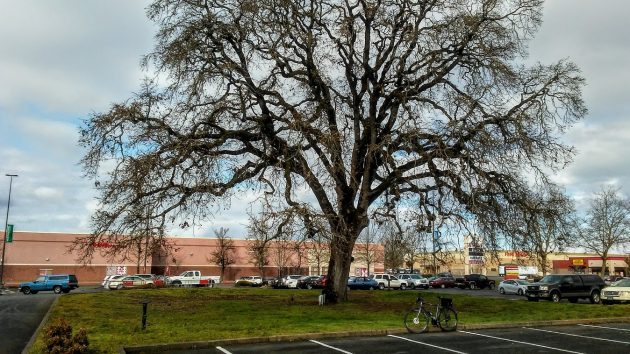 The “messenger oak” at Heritage Mall on Tuesday afternoon.

Unlike some other big old trees, Albany’s so-called “messenger oak” at Heritage Mall seems to have survived the ice storm this month without visible damage.

The age of this Oregon white oak is unknown. The city’s list of officially designated heritage trees says its age has been conservatively estimated to be at least 150 years. In news stories going back decades, the reported estimates ranged upwards of 250 years.

The tree’s nickname stems from this: Back in the day, people supposedly would leave written notes to each other crammed in the crevices of the bark. (This seems to defy good sense. How would the recipients know that a message was waiting for them at the tree? How could a sender be sure only the intended recipient would read it?)

In any case, when I finally got around on Tuesday to take a look, the old oak in the mall parking lot looked in pretty good shape. I saw no breaks where any big limbs succumbed to the weight of the ice.

Other big trees did not fare so well. One that didn’t is at 1811 Salem Ave. S.E. City forester Ric Barnett says it could be the largest and perhaps oldest white oak in Albany.

The massive base of that oak sits in the back of the house at that address. I had to peak over the fence to see it.

Big parts of the tree cracked under the weight of the ice and, coming down, substantially damaged the house underneath.

Barnett says that while what remains of the crown does not pose an immediate hazard, it would be a good idea to remove the rest of the oak before next winter. He has written the homeowners to contact him “so we can work with them on what it would take to remove.”

If and when it is taken down, they’ll count the rings and find the age of this big oak. (hh) 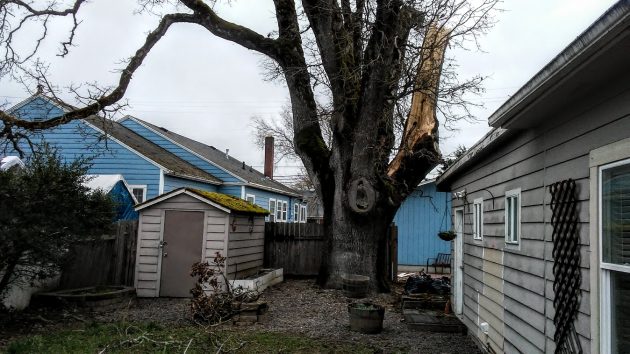 The damaged white oak at 1811 Salem Ave. may be the oldest of its kind in Albany.