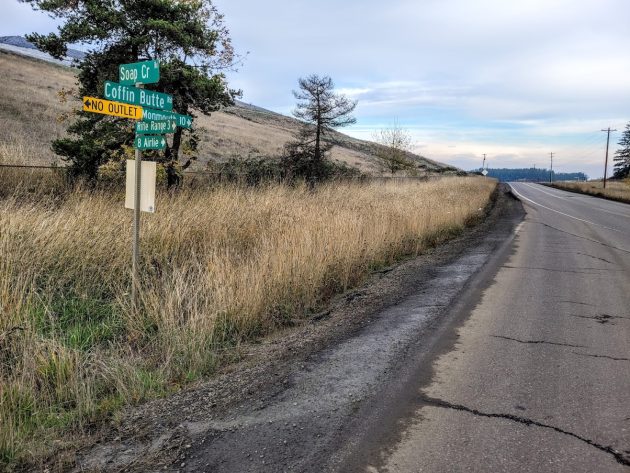 This is the road that would be closed and covered by garbage if the Coffin Butte Landfill is expanded as planned by Republic Services.

The proposed expansion of the Coffin Butte Landfill occupied the Benton County Planning Commission for four hours on Tuesday night. It was a public hearing, but the public didn’t get to speak till a quarter to 10.

By the time public testimony ended for the night, at 11 o’oclock, 14 people had told the commission why they thought the addition of a new waste disposal area totaling 49 acres was a bad idea. But more had signed up to speak at the virtual session on the GoToMeeting platform, and they’ll get the chance when the commission meets the same way again on Nov 16.

The opponents, many of them living in the Soap Creek Valley west of the landfill, made many points about the effect the dump’s expansion would have on them and the environment of the area. The most powerful, in my opinion, was that the proposed closure of Coffin Butte Road would put an “undue burden” on people who use this road to go anywhere and go home again.

For them it’s the safest way to commute, especially when Tampico Road, hilly and narrow, becomes dangerous because of snow and ice. It’s also the shortest route to take if families have to evacuate the area because of wildfire or some other emergency.

Another of their points: Coffin Butte Road is a public asset on which the county has spent money over the years, and it should not be given to a private company to be covered with trash a couple hundred feet high.

It’s not the function of this story to recite all the objections people brought up. If you want them, find the recording of the session on the Benton County website. But the road issue dominated the discussion.

The county planning staff had suggested a number of conditions if the county allows the expansion, among them that Republic Services, which operates the landfill, pay for widening and strengthening Tampico Road from near Soap Creek Road to Highway 99W, and also for improving Wiles and Robison Road northwest of the dump as an alternative evacuation route.

Republic objected to that plan. Instead, it wants to leave Tampico Road the way it is and improve the Wiles-Robison route.

After the Nov. 16 session to hear more testimony, the commission agreed to keep the record open to receive a study on landfill noise from Republic. Then it plans to deliberate and decide on the conditional use permit for the expansion on Dec. 7.

Whether that will be the end of this controversy, we’ll have to wait to find out.. (hh) 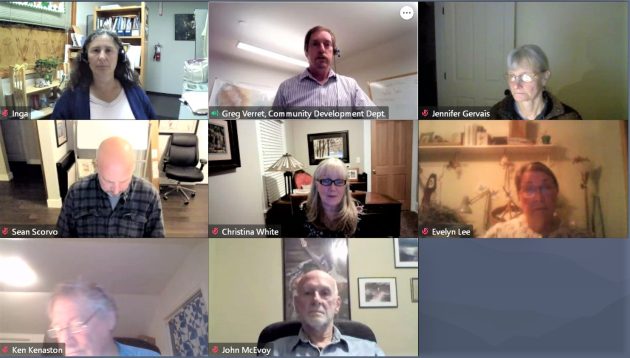 The Benton County Planning Commission and staff at the start of Tuesday’s landfill hearing.


8 responses to “Landfill hearing goes on for four hours”