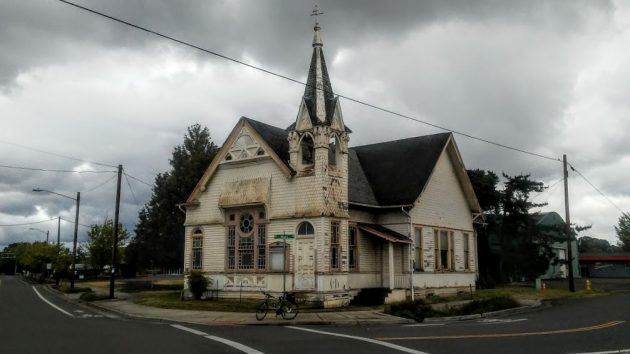 The former church at Santiam and Main is on the city council’s agenda again this week.

The historic former Cumberland Presbyterian Church has periodically occupied the Albany Council for the last 20 years. Now it’s on the agenda again.

On Wednesday night (June 10), the council will be asked to authorize negotiations for an agreement to sell and/or lease city property near Hackleman Park to the nonprofit that wants to move the former church and turn it into a community or event center.

The proposed site consists of four lots on Santiam Road, a quarter-mile from where the church sits at Santiam and Main.

As outlined by the city staff, the deal would have the Cumberland Community Event Center buy one of the lots for $69,000 and lease the other three for up to 10 years, with lease payments counting toward eventual purchase of the land.

Once the building is remodeled, the nonprofit and the city would enter a “use agreement” allowing the city to have the place eight hours a month for recreation programs.

After the building is moved, the city would declare its historic site to be surplus and try to sell it, with proceeds going to the street fund. (The city paid $150,000 for the property in 2000 for a street project that later was redesigned to make the purchase unnecessary.)

In September 2019, the council informally agreed to give the building to the Cumberland group for one dollar, with any deal for its future site still up in the air.

When last I wrote about this in February, the Cumberland group estimated the project would cost more than $1 million. It had raised about $50,000 and was hoping for grants.

One question about this enterprise that no one has raised, let alone answered, is that of “historic review.”

Built in 1892 and expanded in the 1920s, the church is listed on Albany’s inventory of historic structures as a Queen Anne-style building. So, would moving it from its historic site and making exterior alterations or using substitute materials require approval by the Albany Landmarks Commission?

We’ll leave that question for another day. (hh)