Kmart site: Looking for a cleanup 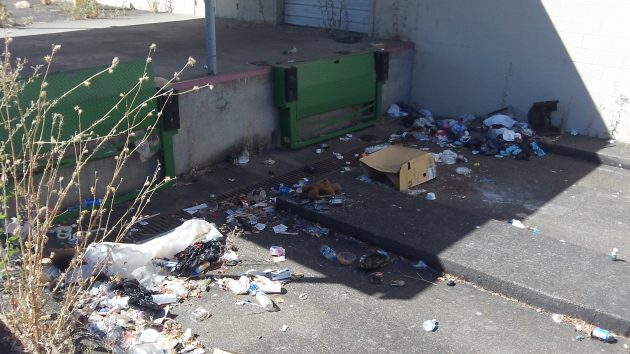 The loading dock at the former Albany Kmart, as it looked a few days ago, on Aug. 28.

The Albany Fire Department announced Wednesday it would train at the former K-mart store before the building is razed. I had circled the building on my bike on Sunday, looking for an indication that demolition had started. I saw no outward sign of that yet, and I also wondered what made people use the old truck ramp in back as a dump.

The Albany Kmart closed in November 2014. The building at 3100 Pacific Blvd. S.E. has been vacant since. And it kind of looks  as though on the side and the back, people have been camping there and leaving some of their junk, among other things, for quite a while.

WinCo Foods, the grocery chain that operates in Corvallis and elsewhere and has just opened a store in Sacramento, plans to have the Kmart structure demolished so it can build a big new store in its place in time to be opened in 2017.

The fire department exercises, made possible by arrangement with the WinCo demolition contractor, are planned for Sept. 2-6. “The building … provides a great opportunity for firefighters and EMTs to conduct emergency training exercises,” the department said. It’s a chance to train “with technical equipment (and) perform commercial roof operations, forcible entry, breaching, and various fire, rescue, and search drills.”

The city said the site will be fenced and the public should stay clear. That should also put an end to whatever has been going on outside the vacant building. And when the structure is finally torn down, presumably the site will be cleaned up as well. (hh)

2 responses to “Kmart site: Looking for a cleanup”