Klamath dams: What was left out 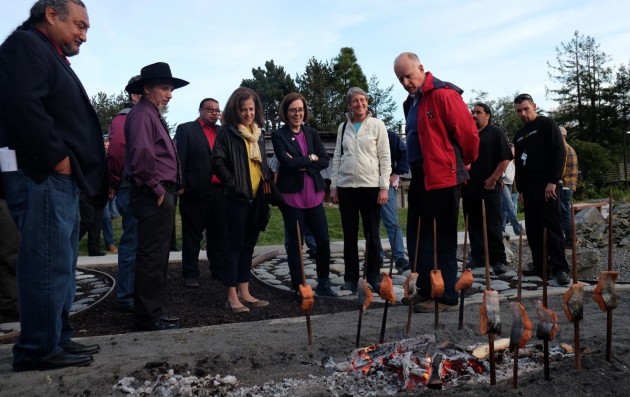 Two governors and others pose with salmon steaks in this shot provided by the U.S. Interior Department.

There were some big holes in the news coverage of the new agreements to tear out four dams on the Klamath River. One was what we’re paying for this. And it was curious that for once nobody worried about carbon, the bogeyman of our age.

Governors Brown of Oregon and California (Kate and Jerry), U.S. Interior Secretary Sally Jewell, the president of Pacific Power and various other luminaries signed the deal in a ceremony on Yurok tribal land near the mouth of the Klamath on Wednesday. It restates the goal of previous agreements – to raze those dams and restore the natural river – but seeks to mostly bypass Congress, which refused to go along before.

None of the stories I saw mentioned that Pacific Power customers are already being charged for part of the cost of taking the dams out. It amounts to only pennies on our monthly bills, but the goal is to collect $200 million from Pacific customers by 2020, the target date for dam removal. Some $184 million is coming from Oregon ratepayers, and the other $16 million from those in California. (As of Feb. 29, Michael Dougherty of the Oregon PUC told me Friday, Oregon had collected $103,165,607.64 toward its goal.)

Customers are routinely charged for part of the cost of facilities supplying them with electricity. But why are we being charged for a process that does away with a generating source that will then have to be replaced by a more expensive one?

The hydroelectric dams on the Klamath are capable pf generating 169 megawatts of what Pacific properly calls low-cost, emission-free energy. PacifiCorp owns the dams, but under environmental pressure, regulators refused to relicense them without very expensive add-ons that allow salmon to struggle upstream. Pacific determined years ago that giving up the dams would be less expensive than trying to get them licensed for another 50 years.

California taxpayers, by the way, are stuck for another $250 million toward removing the dams. That amount was included in a much bigger water-related bond issue approved last year.

How come no mention of carbon emissions? Imagine the vast amounts of fossil fuel expended when heavy machinery is deployed to dismantle those structures, from Iron Gate in California from Copco 1 and 2 upstream in Oregon and then J.C. Boyle? And this to get rid of structures that on average generate 716 gigawatt-hours of carbon-free electricity a year. It’s only a tiny portion of Pacific’s capacity, but it’s still enough to power about 70,000 homes.

Government officials and numerous environmental lobbying groups say once the dams are gone – along with 20 recreation sites and boat ramps on the reservoirs — salmon will once again thrive on the Klamath. Maybe. Most of the river water comes from shallow Upper Klamath Lake, which the U.S. Geological Survey says was eutrophic and prone to algae blooms even before European settlement and has since become even more so. Not the best water for salmon, one would think.

Reports of the new Klamath agreement implied it would provide more water. Only nature can do that. Flows in the Klamath have been regulated by the Bureau of Reclamation to, in that order, benefit fish and wildlife, meet irrigation needs and provide for flood control. Electricity is generated from what’s left over. So the dams had nothing to do with low water in the Klamath River.

At the signing ceremony, the Yurok tribal chairman said, “What’s sacred needs to be kept sacred… The path that we’re taking is a sacred path.”

We’re getting rid of these dams, it appears, for corporate, political, ideological and even religious or spiritual reasons. Keep that in mind when you consider the bill. (hh)


11 responses to “Klamath dams: What was left out”