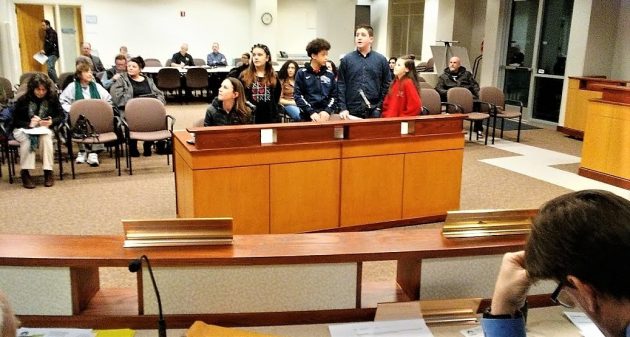 At the podium before the council, the Memorial “Green Team” looks at points it was making on an overhead screen.

Nothing had been heard lately about banning plastic bags in Albany — until a group of Memorial Middle School students showed up at the city council’s meeting Wednesday night.

It’s been years since Corvallis and a few other towns did away with most common plastic shopping bags. (But it still comes as a shock when you, as an out-of-towner, ask for a plastic sack at a Corvallis Bi-Mart because you need one and are starchly informed that they can’t give you one.)

Albany has so far avoided this particular government intrusion on what people can and cannot do.

On Wednesday the city council heard a pitch from four earnest middle schoolers. They want the council to consider banning the use of single-use plastic bags for environmental reasons. Among their points: They worry that the bags, being light, are blown into rivers and end up in the ocean, where they could end up being ingested by wildlife, which wouldn’t do the wildlife any good.

The council listened with the usual respect it shows school children who show enough gumption to stand up at a public meeting before a government body to make a point. Their presentation displayed on overhead screens listed the authors as Danielle Hernandez, William Summit, Laik Gregory, and Joshua LaBelle.

Councilors asked a couple of questions. Mayor Sharon Konopa suggested to the group that they make their proposal to the legislature too. Oregon lawmakers have shown no interest in a statewide plastic bag ban after the idea got nowhere two or three sessions ago.

The kids referred to single-use plastic bags. There are, however, many secondary uses for those handy sacks you get for free at supermarkets and lots of other places. Transporting soggy bike clothes back home for laundering is one. Councilman Dick Olsen alluded to another when he told the kids that he has dogs. (hh)