Keeping up with our bridges 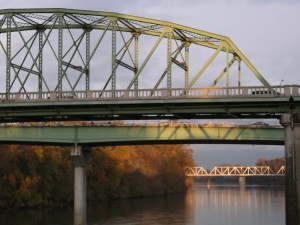 The collapse of a bridge on Interstate 5 north of Seattle once again reminds us that our bridges need constant attention, maintenance and occasional repairs. I can’t say whether we’re doing enough on that score in Oregon, but ODOT is certainly doing a lot.

A few weeks ago I mentioned the work to protect the Alsea Bay bridge on the coast from corrosion by giving it a new paint job. Freeway travelers know about the replacement bridges being built in Eugene and elsewhere. Last year the Santiam River Bridge at Jefferson cracked and had to be repaired. Albany’s Ellsworth Street bridge has had two upgrades in the last 20 years. Just now, on May 29 and 30, it will be closed at night so steel supports can be replaced.

The damaged parts of the Santiam bridge had escaped notice until they cracked, but from most other experience we know ODOT takes pains to inspect bridges and prevent trouble before it has a chance to develop. Last year I looked at inspection reports on Albany and Corvallis highway bridges on the Willamette. They were functionally obsolete but in reasonable shape otherwise, and ODOT tries not to let them get worse. (hh)