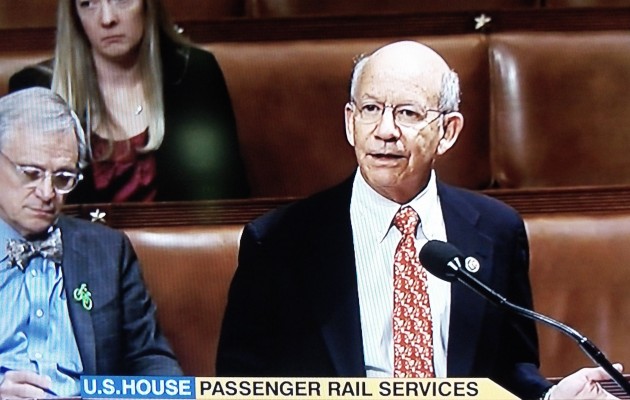 Amtrak may not make sense in dollars and cents, but I’d hate to see Albany and much of the country lose passenger train service. So I’m glad the U.S. House of Representatives on Wednesday passed HR 749, the Amtrak funding bill. As Oregon’s Congressman Peter DeFazio said on the floor of the House, without passenger trains we’d be like part of the Third World.

It’s not as though there are no good reasons to question Amtrak. Rep. Tom McClintock, a Republican from California’s Central Valley, named some of them in arguing for an amendment that would have put an end to federal subsidies of the rail passenger system: Amtrak’s promises of reforming itself and becoming self-sufficient have gone unfulfilled for all the years it has been in business. It keeps losing money. It costs taxpayers $45 every time a passenger steps on a train, up from $32 six years ago.

“This is not getting better,” McClintock said. According to him, the average pay of an Amtrak worker selling snacks and drinks is $106,000 a year, which might help explain why the system’s food and beverage operation loses $800 million annually.

The bill gives Amtrak more than $7 billion over five years, starting with $1.4 billion in 2016. So the numbers argue for pulling the plug, but the House defeated his amendment. Then the House passed the bill, 316 to 101, with 132 Republicans joining 184 Democrats on the “aye” side. Who said bipartisanship is dead? (I watched the proceeding on C-Span, a great aid in following what the Congress does.)

So why is it a good idea to keep Amtrak alive despite its costs? Because more people are taking the train. DeFazio said ridership is up 14 percent. The system’s losses are getting smaller, down 48 percent, according to DeFazio, the ranking member of the House Transportation Committee.

Besides,what good would our nicely restored Albany Station be without the six daily trains that stop there?

And there’s another reason, cited by DeFazio. The country is aging. If people don’t need to get some place across the country in a hurry, they might prefer the pleasure of going by train instead of enduring the hassles of air travel. DeFazio should know because he flies back and forth across the country a lot. If he had the time, he’d take the train. (hh)