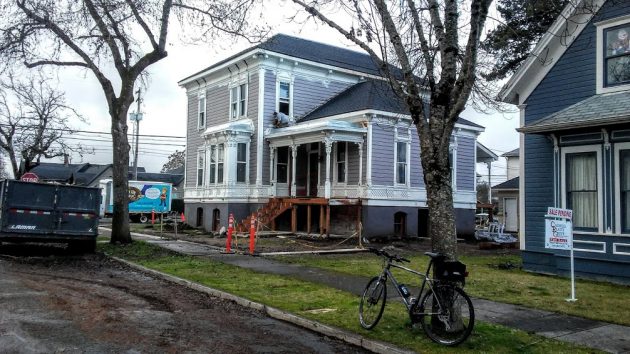 The historic Goltra House on Jan. 1, 2020: Anybody miss the chimneys?

In November 2019, the Albany Landmarks Commission approved contractor Joel Dahl’s restoration of the historic Goltra House at Montgomery Street and Fourth Avenue, but members were interested in preserving a future possibility of recreating the appearance of two elaborate brick chimneys sticking out above the roof.

Dahl had told the commission that the chimneys were in such bad shape that they were dangerous and had to be removed. The commission members by and large agreed. But they asked Dahl, owner of the 1892 house he is restoring for his family to live in, to document the chimneys so they might some day be recreated.

Members talked of the chimneys being an important factor in the appearance of the house. They mentioned that someone might some day want to fashion nonfunctioning replicas from fiberglass, much lighter than the originals.

I went by the place on New Year’s Day, while work on the exterior was continuing and after the crumbling and unsafe chimneys had been taken down. It’s just an opinion, but it seems to me that the house looks just as stately with a clear roof as it did before, maybe even more so. Its hard to see why anybody would miss the look of those two brick pillars.

The restoration of this nice old house in the Hackleman Historic District is quite an accomplishment, I would think. And I doubt anybody will ever want a future owner to plop a couple of artificial, fiberglass chimneys on the roof. (hh) 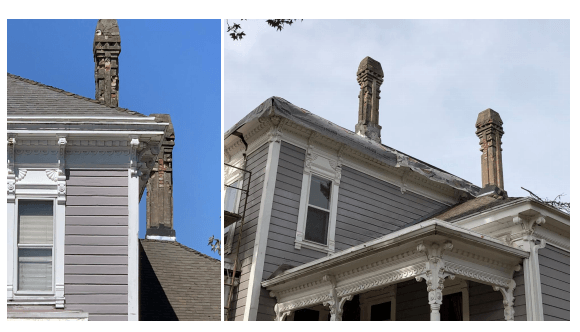 These photos of the chimneys were part of the staff report before the Landmarks Commission.


3 responses to “Just sayin’: Looks fine without the chimneys”