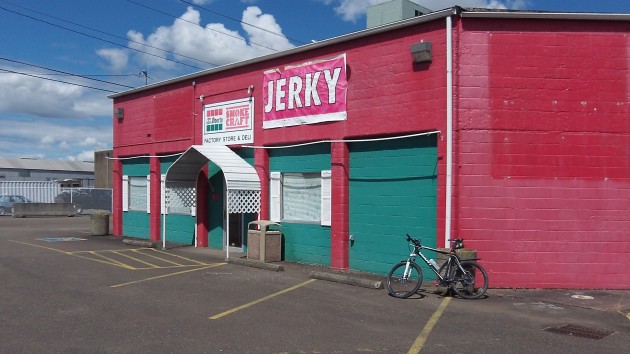 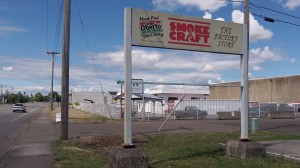 It was four years ago this summer that the Oberto Sausage Co. closed the Albany plant it had bought from Smokecraft about a dozen years before. But as you can see, the old signs are still up. I wonder if any out-of-towners passing by on Pacific Boulevard see the sign and stop, hoping to load up on jerky only to find the place closed.

Forty-three Albany jobs were lost when the factory closed in 2010, according to a report in the local paper at the time. By that time the work force had been much diminished from a reported 390 at the time of a fire in 2002.

While it was still present, Oberto was a good neighbor in the mid-valley. Among other things, the company donated uncounted sausages at community events, such as neighborhood picnics organized by the city parks department. (I took part in some of those and can testify that the sausages were first rate.)

Oberto, based in Kent, Wash., still owns the seven tax lots that make up the vacant plant, according to Linn County tax records available online. The company has been paying taxes on the land (a little more than 5 acres) and the idle buildings. Last year, the individual tax lots had a combined real market value of $769,600, according to the assessor. The combined tax bill before discounts for timely payment in 2013 was $11,251. 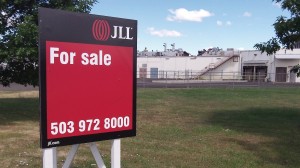 The property is for sale, as the sign says. I wonder if there are uses for a former sausage and jerky factory, uses that would lead to a sale and renewed life of what used to be big chunk of the food-processing industry around here. Meanwhile, how about taking down the signs? (hh)