It’s to keep our power on … 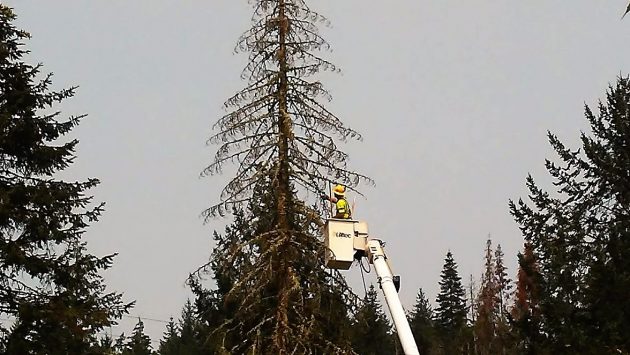 Troy Handy gets ready to take down a dead tree on Powers Avenue on Tuesday.

Trimming branches above power lines is not the only thing that has to be done from time to time. Sometimes, as in this case, the whole top of a dead tree has to come down.

A crew from Trees Inc., a contractor for Pacific Power, has been working in North Albany for a couple of weeks. On Tuesday, they got to Powers Avenue, where I had a front-row seat. And I was impressed by the skill they showed in taking the top off a big old conifer that had been dead for years.

They had to thread the aerial bucket through the gap between a Comcast cable below and the electric wires above, then swing it out nearly as far from the truck as it would go.  Troy Handy, of Cottage Grove, was the man in the bucket. As I hope the video below shows, he expertly chainsawed the top so that — naturally — it fell away from the wires and from him.

This old snag was a potential danger. A strong blow might have thrown it across the power lines in any of the next few winters.  Not along ago, the top of a live sequoia across the street snapped off, and it was a good thing it didn’t do any damage when it came down.

This crew, one of them told me, works for Pacific Power in towns from the foothills of the Cascades to Lincoln City, coming through different locations every two or four years depending how fast the trees grow.

There are power outages every time there’s a strong storm, especially in winter. It would be worse if it wasn’t for this work. (hh)