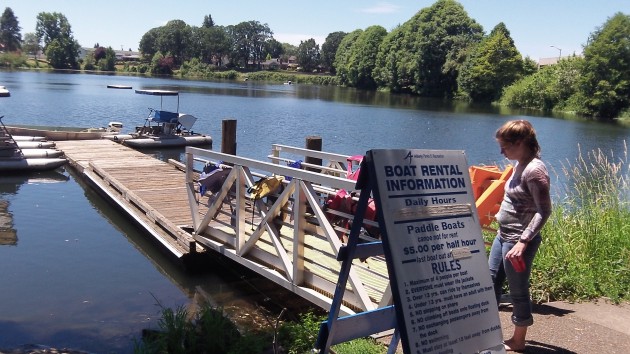 A sign board lists the rules for paddle-boating on Waverly Lake.

Pedaling past Waverly Lake on Saturday, I was glad to see that in this time of turmoil and change, one Albany tradition is being kept alive this summer. The paddle boats are out there again, and have been since the last week of June.

The paddle craft have been available for rent on the pond for the last several summers, sponsored by Coastal Farm and Ranch Supply. The attendant told me, when I asked him, that the company is the sponsor again this year, though the paddle boat item on the city website doesn’t mention it.

There are eight of these little craft. The fee to rent one is $5 for half an hour, which seems a little stiff, but on Saturday, business was fairly steady. During the few minutes that I stopped by on my bike and watched, two sets of grown-ups and kids embarked, two or three were already out on the water, and another was about to come back in. (Some of that is in the video below.)

Paddle boaters are warned to stay away from the Salem Avenue bridge, lest they get caught at the dam, and also to avoid a gravel bar at the other end of the pond. While I was watching, nobody got stuck at either place. (hh)