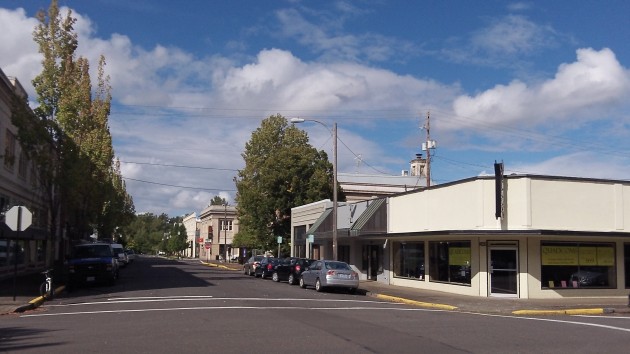 The corner of Broadalbin and Third on a slow afternoon on Sept. 17.

Albany’s downtown streets might get a facelift over the next few years. Or they might not, depending on what the Central Albany Revitalization Area advisory board thinks of design options worked up the Portland firm of George Crandall, CARA’s architectural adviser.

About a year ago there was discussion on the city council of doing something to turn Ellsworth and Lyon into more than conduits that sluice traffic through downtown Albany. It was Councilor Rich Kellum who was particularly keen on this idea. Also, two or three  business owners on Second Avenue downtown have long waited for the city to upgrade their sidewalks the way First Avenue was done more than a decade ago.

More recently, there has been loose talk about converting one or more blocks of Second east of Ellsworth to angled parking on the south side, especially now that Novak’s Hungarian Restaurant has opened there.

To get a handle on all this, the CARA urban renewal district commissioned Crandall to look at what might be done not just there but on neighboring streets as well. On Wednesday afternoon, Crandall is scheduled to show the CARA board what his firm came up with. According to a memo on the agenda, he’ll take the board through design options for segments of Second, Third and Water avenues as well as Broadalbin, Lyon and Ellsworth streets. City engineers Staci Belcastro, Chris Cerklewski and Lori Schumacher gathered data for this project, and it looks as though the presentation will be complete with cost estimates and recommendations on schedulingthe work in phases.

For CARA, the point of any potential street project downtown is to encourage new businesses to move into empty spaces or help existing ones to thrive.The CARA board — comprised of the city council and seven others — meets at 5:15 Wednesday in the council chambers at City Hall. If you’re interested, check it out. (hh)