Is this project really necessary? 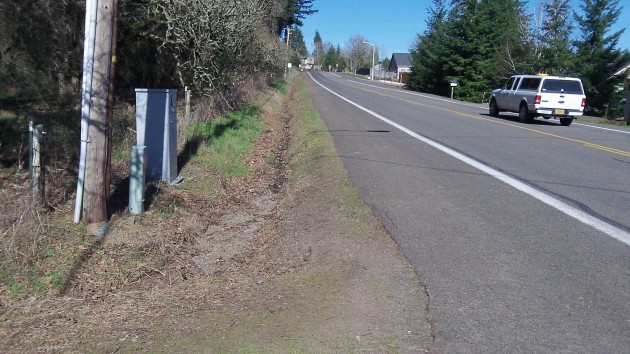 A wide walking and bike path, a convenient ditch: What is there to improve?

On a sunny and warm mid-winter day, a bike ride over the top of Valley View Drive and down Crocker Lane put me in mind of — what else? — an action by the Albany City Council last week. And I’m wondering whether the council really thinks it’s necessary to make two road improvements for which adjoining property owners may get billed more than $1.7 million.

What the council did on Feb. 11 was to accept the public works department’s engineering and financial investigation reports for sections of Crocker and Valley View and to call a public hearing for March 11. The city staff is proposing to improve Crocker to city standards from Meadow Wood Drive north to Valley View, and to build a multi-use path on the south side of Valley View from Crocker 870 feet west.

Crocker would end up with two 11-foot-wide travel lanes, 6-foot bike lanes and 6-foot sidewalks at a cost so far estimated at $1,462,000, which would be assessed against about 190 lots. Depending on how much the city contributes from street-related reserves, individual assessments would range from $4,700 to $7,600. That would be $54 to $87 per month over 10 years. The Valley View path expense was estimated at $260,000, which translates to $1,429 per lot (affecting about 180 lots) or $16 per lot per month. If the city goes ahead and does the project, it won’t know the actual costs until the projects are bid, completed and paid for, at which time the property owners would get the bill.

Looking at these projects from on top of a bike, I can see a reason for the extra path along Valley View. There’s no shoulder there to speak of, and if people want to walk there, cars have to go around them. (The path would not be necessary if, as proposed, an adjoining woodland is donated to Benton County and a walkway is built through the trees.)

Crocker is completely different. It already is lined with well paved 6-foot bike lanes on both sides, and since the grade is steep and bike traffic rare, that is more than sufficient for any kind of nonmotorized travel. On its west side, Crocker also has a shallow ditch, more than adequate to carry away runoff naturally without the need to build storm drains, avoiding the treatment expense that this may some day entail.

With conditions so ideal already, why does the city want to build costly “improvements”? Two reasons, as far as I can see: The city transportation systems plan calls for city streets there (with curbs, sidewalks, bike lanes and storm drains), and developers of nearby subdivisions signed waivers saying future owners of lots would not object to assessments, and the waivers will expire over the next few years.

But you’d think that the first question should be: Regardless of plans and expiring waivers, does spending this kind of money make sense? Given the location near the north city limits, where no great increase in traffic can be expected, and the existing conditions, which are good for motorists and great for walkers and cyclists, the answer on Crocker is no, it does not make sense.

Maybe those property owners can think of a better way to spend that $1.46 million. And as for whatever cash the council ends up contributing, it might want to save it for some solution on Gibson Hill that allows Crocker traffic to get to town during the morning rush. (hh)


11 responses to “Is this project really necessary?”