Is it twilight for downtown library? 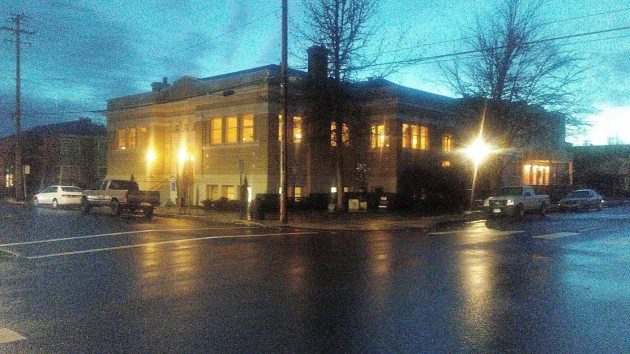 The Albany Carnegie Library one evening in December 2018.

Casting about for ways to save money, the Albany City Council is talking about possibly “repurposing” the downtown Carnegie Library. What that means, apparently, is closing the library and using the building for something else.

This was one of several ideas kicked around at a council work session Monday. Nobody decided anything. And before the library idea goes any further, Mayor Sharon Konopa says there would have to be lots of “outreach” to the community first.

The downtown library branch costs about $215,000 a year to operate, about $37,000 for running the building and the rest for staffing. Closing it might save the cost of the equivalent of two employees.

Councilors Bessie Johnson and Rich Kellum seemed to be most interested in this “repurposing” idea. Councilman Dick Olsen was against it.

Kellum says the building might serve as the combined office of the Albany Visitors Association and the Albany Downtown Association, both of which get a share of the city’s room tax on overnight guests, and perhaps other agencies as well.

Closing the dowtown library is just one of more than a dozen ideas the council talked about Monday, in addition to a list of ways to raise more money. Putting a tax on soft drinks and on beds in assisted-living homes were among the more far-out possibilities, some of which may get more play in the months to come.

City Manager Peter Troedsson asked councilors to rank their choices, and he’ll compile and report the results. If you’re up to it, you can listen to the discussion here. (hh)


19 responses to “Is it twilight for downtown library?”