Is it running? Checking on Albany Hydro 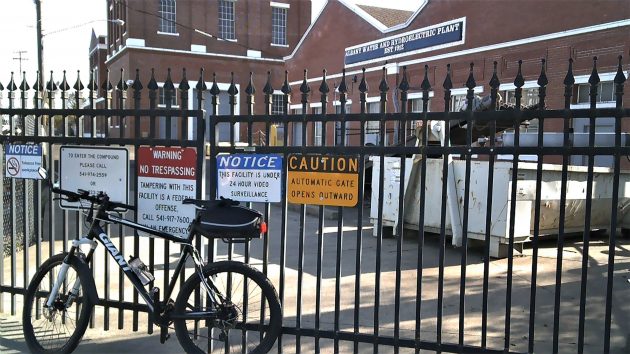 Sunday afternoon found the bike and me once again at the gates of Albany’s historic Vine Street water treatment plant and hydropower generating station.

The point was to nail down that the generator had been restarted after being off line in March. One can do that by looking off the Third Avenue Bridge. Click on the video below to see what I saw.

The city now expects to keep the turbine turning until some time in June, when power production will have to be shut down until the fall under the terms of the city’s license from the Federal Energy Regulating Commission.

The generator is allowed to operate only if the flow in the South Santiam River near the canal intake above Lebanon is at least 1,100 cubic feet per second. The river usually falls below that volume in the summer.

For a summary of the early years of the Vine Street plant, go read the historical marker near the gate, at Third Avenue and Vine. (hh)


4 responses to “Is it running? Checking on Albany Hydro”