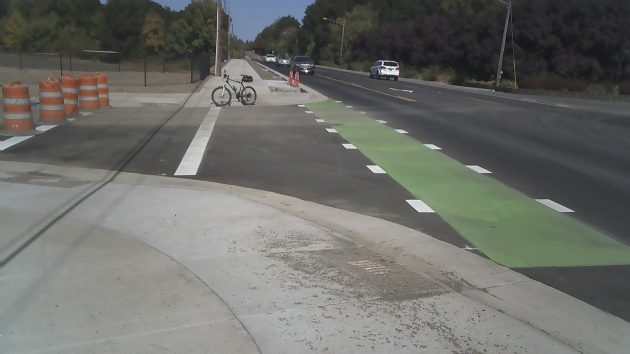 Looking north on the newly improved section of Columbus Street on Sunday.

As drivers on Columbus Street south of Albany know, construction is well under way on the start of the Henshaw Farm subdivision, a big new housing development at the corner of Columbus and Ellingson Road. The one novel item I noticed Sunday was a bit of green pavement at the entrance to one of the new streets.

Putting down green paint is an attempt to enhance traffic safety in places of potential conflict between people in motor vehicles and people on bikes.  The paint approach is old hat in cities from Portland to Medford and lots of other places. But in Albany it’s the first example I’ve seen.

This green strip runs across the opening of one of the new subdivision streets on Columbus. It’s where a bike path crosses the street. The green color  is supposed to remind drivers and cyclists to be aware of and watch out for each other.

The Henshaw Subdivision has been in the planning stages since about 2005. The plans have been scaled back since then. What’s under construction now is the infrastructure for the first of 226 lots on what used to be a big grass seed field on both sides of a BPA transmission line.

The building permit for site improvements in Phase 1 of the subdivision lists the value of the work as just under $6 million. It’s a sharp reminder of just what “infrastructure” costs. (hh) 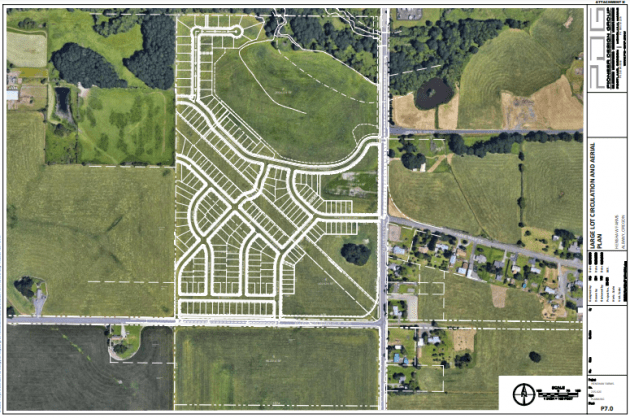 This image on file at the city shows the layout of the Henshaw Farm subdivision. 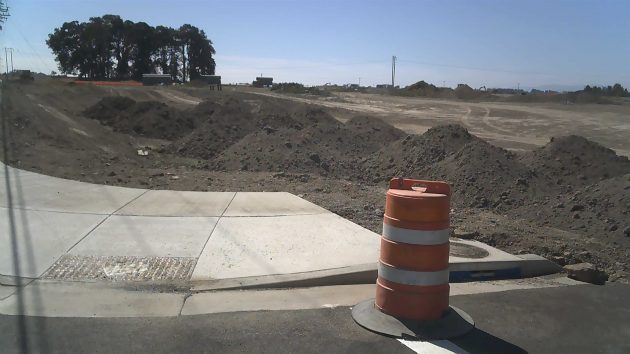 That oak island in the distance will be left standing.


2 responses to “Innovation on Columbus: A green bike lane”