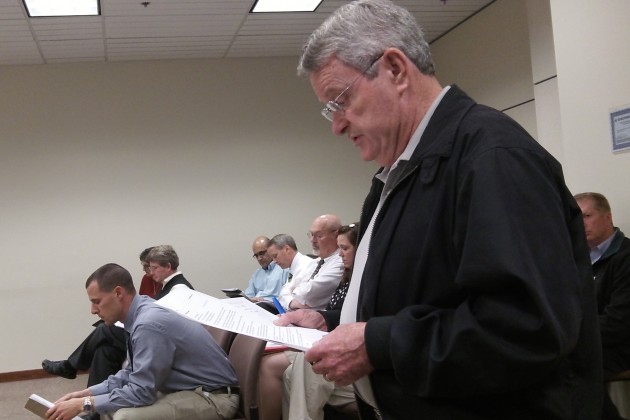 Tom Cordier, when he spoke to the city council in April on another matter.

Albany City Clerk Mary Dibble has rejected two initiatives and acepted four others proposed by North Albany resident Tom Cordier. But Cordier plans to file an amended version bundling the four into one and dropping the idea that got the other two rejected. That idea was to repeal all existing franchise fees and privilege taxes in six months unless voters renewed them.

“We’ll rewrite some language on existing fees/taxes,” Cordier told me in an email. “We disagree with the administrative decision to reject. Yes, the city has a right to administer contracts as to compliance with traffic, excavations, clean-up and notifications. When they contain fees, taxes to be paid by residents, voters have a right to object in a legislative way.”

On July 31 Cordier had filed six initiative proposals aiming to let voters decide on city utility franchise taxes or fees and on any similar taxes on other sales. Based on the advice of the city attorney, the clerk rejected two proposals which, if placed on the ballot and approved by voters, would have repealed all franchise taxes after six months unless voters renewed them.

“Both measures propose the cancellation of existing utility franchise contracts,” the clerk wrote to Cordier on Thursday. “Cancellation of a contract is an administrative decision other than a legislative matter.” Under the state constitution, the initiative process applies to legislation only.

Today, Dibble notified Cordier that his other four petitions comply with the constitutional requirements for initiatives and will be forwarded to the city attorney for the writing of ballot titles. (I’m thinking he might hold up on that, given Cordier’s intention to file a substitute measure.) Once a ballot title is written, the sponsor will be free to gather signatures. To qualify for the ballot, a city initiatve needs the signatures of at least 15 percent of registered voters.

The measures accepted by the city clerk would require the voters’ approval of any new or increased utility franchise fee or similar sales tax. What prompted all this was that the city council voted to replace the 5 percent privilege tax imposed on Pacific Power with a 7 percent franchise fee. Cordier objected and wanted the council to hold a public hearing, but the council went ahead without one.

No other franchise fee hikes are in the works. Which raises another question: If electric customers pay 7 percent of their bill for heat next winter, why should people heating with natural gas get by with paying 5 percent, as they do now? (hh)