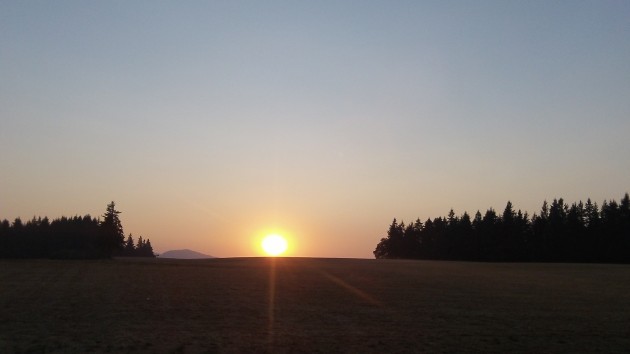 Sunset in August: Permanent daylight time would give us longer, lighter evenings year-round.

David A. Miles, a resident of Medford, wants to make daylight saving time unconstitutional in Oregon. Good luck to him.

Miles has lived in Oregon about nine years, the last five in Jackson County, and works as a community service deputy for the Jackson County sheriff. He is careful to emphasize that he did what he just did as a private citizen, and it has nothing whatever to do with his job.

Then, unfortunately, his amendment  adds this sentence: “Individual counties within the state of Oregon may, through general county elections, adopt time zones that are contrary to this amendment.” That’s all we need, a law that would allow Albany, Eugene, Corvallis and Salem all to be in different time zones if the voters were crazy enough to decide that’s what they wanted.

Miles now faces the challenge of collecting signatures from 1,000 Oregon voters before the state will write a ballot title for his one-paragraph amendment. Only when he has the title can he start trying to get the almost 118,000 signatures needed to get his measure on the ballot in the 2016 general election. It’s a long shot, to put it mildly.

Davis told me on the phone he did not like the twice-annual time switch and was tired of waiting for the politicians to do something about it. In the legislature this year, Republican Sens. Kim Thatcher of Keizer and Brian Boquist of Dallas introduced separate bills to have Oregon get away from daylight saving time, the way Arizona and Hawaii have done for years.

Both bills died in the Senate Rules Committee. The committee held a hearing, though, and it received a lot of advice, much of it questionable. One person claimed that it had been “proven” that daylight time saved electricity. Another objected that without daylight time, sunrise near the summer solstice would happen at 4:30 a.m., and who needs sunshine that early?

The one reasonable point made by defenders of daylight time was that it gives people an hour more of daylight after work. That’s enough of an advantage to argue for keeping daylight time all year round. If the legislature took that step, we would not need an initiative to get rid of these senseless semiannual shifts in time. (hh)