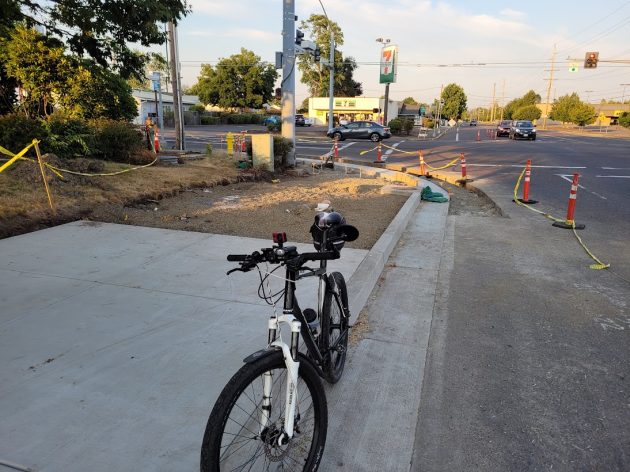 The unfinished corner of the Periwinkle Bikepath extension at Queen and Geary on July 26.

If you’re wondering why the extension of the Periwinkle Bikepath along Queen Avenue in Albany is still unfinished, there’s an explanation. And like so much else these days, it has to do with a shortage of supplies and the time it takes to get things you want or need.

What shortage, you ask?

Well, take little things like a certain brand of soft margarine that comes in a yellow plastic box. It’s been off the grocery shelves for weeks. At Fred Meyer in Albany, there’s a little note saying they’ll restock it as soon as it’s available.

No margarine? When was the last time that happpened? World War II?

Or take big things, like the refurbishing of Central School in Albany so that the children and their teachers don’t have to shiver in the winter or swelter during the warm days of spring. The schoolboard hoped the construction including HVAC upgrades would be done this summer. In July the board was told that sorry, the project won’t be done until the summer of 2023.

And why is that? Because the lead time for delivery of the electrical box needed for this project is 12 months.

Then there’s the sad sight of Albany car lots. The lots are mostly empty of new merchandise. There’s a smattering of second-hand vehicles, but generally the lots look pretty bare. The story is that manufacturers can’t make cars fast enough because of the continuing shortage of computer chips.

As for the Queen Avenue extension of the bikeway and multiple-use path to the intersection with Geary, most of the path has been finished. But the crucial end, at Geary Street, is incomplete and impassable.

From Chris Cerklewski, the engineer overseeing the project for Albany Public Works, the explanation on Wednesday was this: “The contractor is planning on having all of the sidewalk work at Queen and Geary done in the next couple of weeks.  They have had issues getting concrete delivered for the project due to high demand this summer, which has slowed them down.”

So, to all the other stuff you can’t get when you want it, we must add ready mix. That’s even though suppliers must be well aware that summer is the time when demand for paving material is at its height.

The public has been told about supply chain problems for a long time. Labor shortages, Covid-19, reliance on China, congestion at the ports, pilferage at rail yards (especially in Los Angeles), the price of diesel fuel, inflation driving everybody mad — the list of unsolved problems goes on and on.

A little delay in a minor paving job that benefits mostly a few people on bikes is no big deal.

But as for the wider picture of our overall economy, you may be forgiven if you start to think the wheels are coming off. (hh) 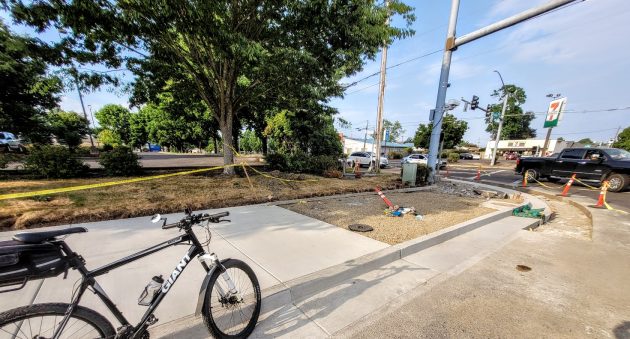 The same corner from a slightly different angle on Saturday evening, July 30.