Incident on I-5: Bizarre and sad 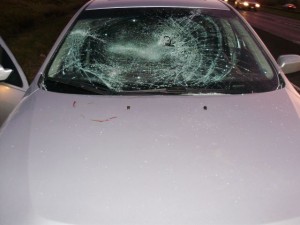 The state police released this photo of the destroyed windshield.

You wonder what makes people act the way they do sometimes. Here’s what the Oregon State Police said happened about 4:30 Saturday afternoon on Interstate 5: Two women, 53 and 61 years of age, were driving north on the freeway when they ran out of gas near the Highway 34 interchange.
As they were sitting in their stalled car, on the phone making arrangements to obtain some fuel, a young woman approached them. She was barefoot and acted strangely. They rolled up the windows and locked the doors. The woman’s “pants dropped,” and she walked across the freeway toward the southbound lanes. She came back, jumped on the hood of the stalled car and then the windshield, caving it in, while the two inside were calling 9-1-1.Then she walked off again.

An OSP trooper was unaware of what had just happened but pulled in the behind the car to see if assistance was needed. The women told him what happened and he alerted other troopers and the Linn County Sheriff’s Office. The young woman was quickly found. Albany Fire Department medics treated her for minor cuts, and she was taken to the county jail. A “suspected controlled substance” was found on her and sent to the OSP crime lab for analysis.

In her booking photo released by the state police, the suspect, 24 years old and from Aumsville, looked disheveled and sad. It must have been close to freezing on I-5. But in the jail, we may assume that at least she was no longer cold. (hh)


One response to “Incident on I-5: Bizarre and sad”