In Willamette area, a renovation 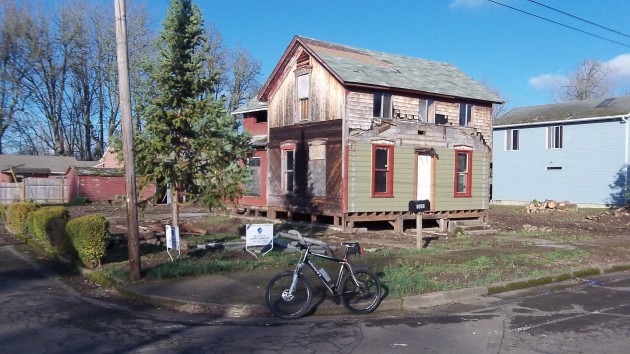 Looks like something is happening with this house, more than a century old, in Albany’s Willamette neighborhood. The site has been cleaned up and there’s a construction company’s sign out front.

The house at 1405 Front Ave. N.E., at the corner of Front and Pine Street about a block from the Willamette River, used to be noteworthy for needing work and apparently being crammed full of stuff. It’s on one of my bike routes, and I noticed the change when I went by there a couple of days ago.

The sign in the yard is from Superior Carpentry and Homebuilding LLC, which owns the property now. The Albany company says on its website it specializes in remodeling and renovations. I called them and talked to the firm’s general contractor, Sean, but it was a bad cell phone connection and I’m going to have to find out more about the company’s plans.

The former owner had been Lola A. Skelton, who as I understand it had lived there since 1935 and died about eight months ago. Now it looks as though while its longtime owner is gone, her former home in this riverside neighborhood, one of Albany’s oldest, may get a new life. (hh)

One response to “In Willamette area, a renovation”